Turn That Noise Down - Marky Mark & the Funky Bunch 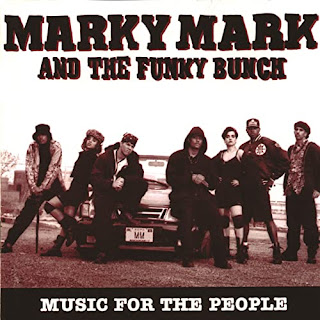 So many well-known albums turn 30 this year and Steve Taylor-Bryant and Susan Omand travel back to 1991 to revisit some of the sounds of their youth that made parents shout "Turn that noise down!" This week, Susan listens to some Music For the People...
Whody-Who and the What Now? Yeah, you may well not remember Marky Mark but you'll definitely know his alter-ego - actor Mark Wahlberg. I know, right? Back before he was "a serious actor" Mark Wahlberg was convinced by his brother Donnie [whose own band you may have heard of... New Kids on the Block - Ed] to straighten his life out (he was in prison at the time) and get his own hippety hoppety beat combo together - The Funky Bunch was the result.
They didn't really make much impact on the charts in the UK though, with only one song, Good Vibrations [thankfully not a cover of the Beach Boys - Ed] bothering the UK charts. A cover song that did do well in the US though was Wildside, which took the riffs and themes from the glorious Lou Reed song and... well... Marky'd it right up.
Okay, so the lyrics and the rap style [which consisted of reading the lyrics off a sheet rather than any kind of performance - Ed] maybe left a little to be desired but, musically, the album has a lot going for it. The sampling in the title track gives a quirky introduction and the brass in Peace is brilliant. The complex time signature in So What Chu Sayin adds a lot of interest and the Hammond organ gives it a serious seventies funk vibe. The atmospheric space-movie intro to Marky Mark Is Here is very cool and would be an "ironic nostalgia hit" if released now. There's an atonality that is cleverly disconcerting in On the House Tip (whether intentionally or not) and the brass is back, adding a freneticism that adds to the edge. The "ballad" on the album is Make Me Say Ooh and really needs a Barry White style vocal rather than Marky. The wah wah guitar snippets are incredible. I Need Money goes heavy on the samples though, with Pink Floyd's cash register and the bop-worthy bassline from the O'Jays For the Love of Money ["money money money money.... MON-EY" - Ed] distracting from the rest of the creativity. The last song on side B is entitled, imaginatively enough, The Last Song on Side B and rounds out an album that could and should have been at least a dancefloor hit, if not a serious "sit and listen to."
Although I'm not sure I can forgive them for the Lou Reed thing... or the movie Ted but that's another story.
Image - Amazon
Email ThisBlogThis!Share to TwitterShare to Facebook