Turn That Noise Down - Crowded House 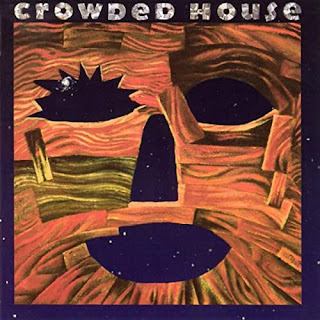 So many well-known albums turn 30 this year and Steve Taylor-Bryant and Susan Omand travel back to 1991 to revisit some of the sounds of their youth that made parents shout "Turn that noise down!" This week, Susan puts on Woodface...
You know more Crowded House songs than you think you do and, to be honest, you’ll find most of them on this album. I must admit though that I never owned Woodface back in the day, I got all my Crowded House off the radio because, well, the hit songs were everywhere. So this is somewhat of a first listen for me and I’m interested to see what, apart from the songs that I know, the band actually sounds like.

Out of the seven tracks in the first half of the album, FIVE were single releases that were huge hits – Chocolate Cake, It’s Only Natural, Fall At Your Feet, Weather With You and Four Seasons in One Day. Of these, Chocolate Cake is probably the least well known, and slightly different in style to the rest of the singles, with sarcasm aplenty in among their trademark highly intelligent lyrics. Add in a great upbeat jazzy piano and a slightly dodgy synth-monica solo and it’s a song that really deserved more airplay. The other singles, however, are so well known that you can probably still sing the choruses at least, without any prompting at all, so suffice to say, they’re great songs to have on in the background and hum mindlessly along with.

The other two tracks on the first side of the album are Tall Trees and Whispers and Moans. Tall Trees is fantastic, with upbeat drums and really interesting strings underpinning a strong guitar and an almost shouty refrain that would be brilliant live. Whispers and Moans kind of reminds me of Sergeant Pepper, in that it has a catchy guitar chug, fascinating orchestration and time signature changes with tight harmonies lifting the song above the ordinary.

Onto the other half of the album now, and a step into the complete unknown for me. There Goes God has a stunning intro which goes into a song that is very REM in both style and subject. This is no bad thing. And I love the harmonica/piano break in the middle. Fame Is is next and a cheery blast after the last one. Hammond organ to the fore, the Sixties hippy vibe is strong with this one. We’re full-on American Songbook style “crooner with orchestra” for All I Ask and it really is beautiful. As Sure As I Am has a lilting and lyrical melody with Celtic roots that remind me of Del Amitri, just with a darker bassline. Italian Plastic is just glorious, with inspired rhyme schemes in the words, over a fairly stripped back backing. I do love the mandolin addition and the addendum is very cool. We’re back among the laid back, easy listening that Crowded House is known for with the penultimate track, She Goes On, and the album rounds out with How Will You Go/I’m Still Here. The intro of that sparked a sudden memory of Every Little Thing She Does is Magic by The Police but this soon dissipates into close harmony vocals over-topping brush snare and happily hippily twangy guitar for the rest of the song. Just when you think the album is done, and after a long silence that lulls you into a falls sense of security, the I’m Still Here part of the medley assaults the senses with punky attitude in tremendous fashion to leave you wondering what just happened. Perfect.

So, yeah, you know more Crowded House songs than you think you do but it seems like there’s still more out there to discover from a vastly under-rated (by me at any rate) band. I will definitely be back for more.
Image - Amazon
Email ThisBlogThis!Share to TwitterShare to Facebook