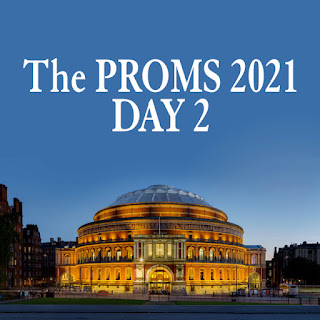 Continuing our daily coverage of what's on at The Proms 2021, Susan Omand takes a quick look at the programme for The Golden Age of Broadway...

The roar of the greasepaint and the smell of the crowd... Even though this isn't strictly classical music there are some absolute classics in this list that will have you singing along [despite the neighbours hammering on the wall for you to stop - Ed]. That said, even for me, there's a couple that I'm not so familiar with. Slaughter on Tenth Avenue sounds interesting, as it's a Richard Rodgers composition so I'm surprised I don't immediately know it. Even more unknown is Joey Joey Joey, and its composer Frank Loesser.
Having done a bit of a dig though, it turns out Loesser is a name that I should have known - among many others, he is responsible for the songs in the wonderful Guys & Dolls, he wrote the film score for the Hans Christian Andersen film that starred Danny Kaye and he's the one to blame for the Oscar-winning [and much covered - Ed] Baby It's Cold Outside, first written for a film called Neptune's Daughter. Here's the original film version by Betty Garrett and Red Skelton.
Here's the full programme for this evening's Prom which you can listen to live from 19:30 on Radio 3 or on the iPlayer

Irving Berlin
There's No Business Like Showbusiness - Annie Get Your Gun

Richard Rodgers
My Funny Valentine - Babes in Arms
Oh, What a Beautiful Mornin’ - Oklahoma!
(When I Marry) Mister Snow - Carousel
Some Enchanted Evening - South Pacific
Slaughter on Tenth Avenue - On Your Toes

George Gershwin
Someone to Watch Over Me - Oh, Kay!
Promenade (‘Walking the Dog’) - Shall We Dance

Jerome Kern
All the Things You Are - Very Warm for May

The Trolley Song - Meet Me in St Louis

Cole Porter
Who Wants to Be a Millionaire? - High Society
Image adapted from NORTH-FACING ENTRANCE OF THE ROYAL ALBERT HALL AT DUSK © David Iliff
Email ThisBlogThis!Share to TwitterShare to Facebook