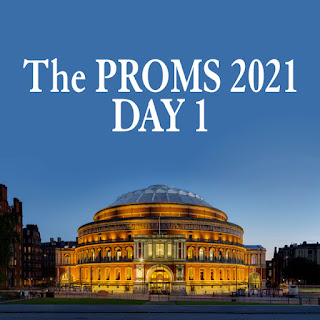 Starting our daily coverage of what's on at The Proms 2021, Susan Omand takes a quick look at the programme for the First Night of the Proms...

And we're off! I must admit though, to me, it's an odd selection to try and hook people in to this year's Proms if you're not a regular listener, as they're not that well known. The main event of the night is Sibelius' second symphony in all its sweeping cinematic grandiosity, immediately preceded by a short, and world premiere, performance of a new work by the Scottish composer Sir James MacMillan. MacMillan is known for having quite a political undertone to a lot of his compositions, mixed with both a traditional and theological influence, so don't expect a light and fluffy 8 minutes for a work entitled "When Soft Voices Die."
The evening starts off with the quintessentially English composer Ralph Vaughan Williams and his Serenade to Music. Written by Vaughan Williams as a tribute to "Father of the Proms" Sir Henry Wood, the work uses the words of Shakespeare's Merchant of Venice, specifically the part in Act V where there is a discussion about music. This is, obviously, set to music, with a chorus of singers each taking solo parts.
The piece that catches my eye most in this first prom, though, is the Organ Concerto of French composer Francis Poulenc. If you know my classical tastes at all, you'll know that I'm a sucker for a big organ [not saying a word - Ed] and this concerto, written in 1938, is gloriously dark and spooky, utilising dischord to keep the listener on edge [so a disconcerto then? - Ed]. Put that instrument in the hands of an expert like Daniel Hyde and it promises to be absolutely epic.
Here's a recording of the full work, this time with soloist Maurice Duruflé, but I've skipped to the start of the last section which highlights both the wonderful "wrong chord"ness and the chiaroscuro effect of the dark organ at the start with the almost ethereal softness of the midsection before coming back to a fanfare proclamation that would give the Phantom of the Opera a run for his money.
Here's the full programme for this evening's Prom which you can listen to live from 19:30 on Radio 3 or on the iPlayer
Ralph Vaughan Williams
Serenade to Music (15 mins)