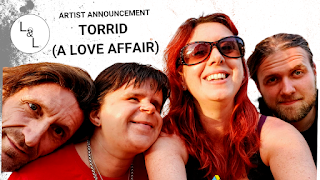 Lights And Lines record label has announced the addition of Brighton based rock band Torrid (A Love Affair) to their roster. Listen to Hold Over Me...

A chance meeting at a gig in 2019 became the catalyst lifelong Singer/Songwriter Sarah and guitarist Adam needed to start a post-grunge, prog rock influenced band that became Torrid (A Love Affair). Lead singer Sarah Delangri said, "I was terrified and desperate to show someone my song ideas! Ads listened in his discerning way that makes me nervous every time, and immediately came up with riffs, harmonies and outros. It just felt meant to be! Once Lorna and Will joined us, the sound I'd had in my head became a glorious reality. Being able to make meaningful songs that have this epic sound is honestly a dream come true! And with the support of Lights And Lines we can't wait to show the world what we do."

With Grunge and Stoner rock influences such as Queens Of The Stone Age and Alice In Chains, Torrid write melodic, heavy, and hook filled songs that are punctuated with 3 part harmonies and packed full of emotive, semi-autobiographical themes.

The band are a perfect fit for the Lights And Lines label as Mike Five explains, “I first came across Torrid when they applied to play this years Off The Record Independent Music Festival and I was blown away by their impressive sound and thoughtful lyrics. Bringing out emotive, purposeful messages through music is exactly what the label is all about - I can’t wait to share more with you!”

Lyrically the band's already impressive catalogue looks at the way people love, hate, and see themselves and others, covering topics such as personal relationships, bullying, and self-reflection.

Working around various lockdowns and restrictions brought on by COVID the band have diligently been working away on their stunning debut album which will be released in 2022 through Lights And Lines.
These songs are big and heavy, and they’ve got purpose and style - you’re going to love them!

Listen to more from the band on BandCamp https://torridaloveaffair.bandcamp.com/ and follow them on social media @Torridtheband
Image & info - Lights & Lines
Email ThisBlogThis!Share to TwitterShare to Facebook