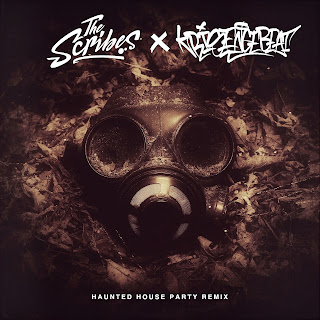 The Scribes x Krisengebeat have released the music video for their Haunted House Party Remix, out now from The Get Down Records...

Bristol based international hip hop imprint The Get Down Records are behind the Haunted House Party Remix, a collaboration between German boom bap beatsmith Krisengebeat and South West UK hip hop crew The Scribes produced exclusively for the label’s Yo! GDR Raps series.

The music video for Haunted House Party Remix is a disconcerting (in a good way) twist on nostalgia that features The Scribes and alter ego Mr Teatime throwing a house party for a selection of stuffed toys that quickly descends into chaos. Asked about the inspiration for the track, The Scribes said "The lyrics are mostly an expression of the loneliness and helplessness I'm sure a lot of people felt during pandemic lockdowns, the building desire to socialise again and the increasing tension of being left alone with your own thoughts for extended periods of time." Krisingebeat added that, for the remix, "My intention was to create a spooky atmosphere. I already got the main sample in my backhand and it made a perfect fit."
Haunted House Party does indeed ride the rollercoaster of emotions brought on by the constant uncertainty of 2020. Krisengebeat provides a truly haunting and atmospheric aural backdrop, reminiscent of old Hammer Horror movies, setting the scene for The Scribes and Mr Teatime to amp up the almost poetically charged rap regarding the ups and downs of being an artist during the pandemic, combining to create an addictive sound that you'll keep replaying to unravel all the layers in the mix.

We also asked the guys how they were handling the whole Pandemic uncertainty and lockdowns themselves and they were fairly upbeat and pragmatic about the situation. The Scribes said, "It was the longest we've been off the road in forever, so while we all missed performing a lot, it did give us time to finish up some projects and pull together some collaborations, like this one, that may not have happened otherwise!" While Krisengebeat took the time to brush up on some more technical work, saying "The pandemic helped me focus on music production skills instead of writing another rap album!"

The Krisengebeat remix is available exclusively through The Get Down Records’ “Yo! GDR Raps” series on Spotify, with the original recording previously released as a double A-Side transparent 7” vinyl alongside second collaboration track Stir Crazy.
Get more info via WWW.THEGETDOWNRECORDS.COM and stream/buy the record via HTTPS://THEGETDOWNRECORDS.BANDCAMP.COM
Photo credit: Rachel Amos Photography
Email ThisBlogThis!Share to TwitterShare to Facebook