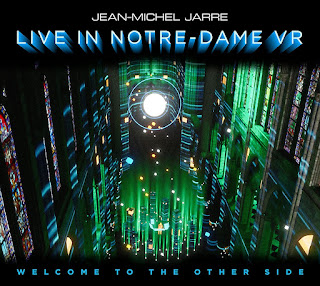 Jean-Michel Jarre has announced a physical release of his New Year's Eve performance, Welcome to the Other Side, in September. Listen to the first single, Herbalizer...
Press Release
Jean-Michel Jarre rang in 2021 with ‘Welcome To The Other Side,’ a ground-breaking live performance from a virtual reality Notre-Dame cathedral. The show, which combined life-like concert visuals in VR with a real live studio performance, introduced a mixed-media approach which was the first of its kind. It attracted a staggering audience of over 75 million viewers globally. This historic achievement saw Jarre top the Pollstar chart for livestreams, outperforming the entire Top 10 combined.

Renowned for his epic and high-tech concerts in iconic landmarks, it was fitting that Jarre should continue this trend despite the pandemic. The musician designed, built, and performed in the VR venue, which was accessible on all available formats, from TV and radio to online video, social media platforms in the East and West, and a fully immersive experience using a VR headset.

In June this year, Jean-Michel Jarre was awarded the insignia of Commander to the Legion of Honour by the President of the Republic, Emmanuel Macron; The Legion of Honour is the highest French order of merit, both military and civil.

Now, Jarre has announced that his NYE live performance, which included tracks from his recent Grammy-nominated opus Electronica, as well as new reworked versions of his classics Oxygène and Equinoxe will be released in physical formats including vinyl, and a CD and blu-ray box set. The latter includes the full concert, along with a MasterClass with Jarre, where he reveals the secrets behind putting on such an ambitious spectacle. Viewers will also have access to a behind-the-scenes video, capturing the final hours leading up to the performance, and its production. Additionally, a newly produced Binaural version of the performance will be available to download digitally, for buyers of any format, as well as via DSPs. The 3D ‘spatial’ audio mix brings a new dimension of sound to listeners on headphones.

Prior to release of the full concert, Jarre will reveal several digital singles of the live versions of tracks including “Herbalizer” (available today), “Oxygene 19” and “Zero Gravity” which will all be available in binaural audio for the first time.

Jean-Michel Jarre said: “The world was in lockdown, we were all living in isolation, confined to our homes which became the central hub of our lives and the only space we had to maintain some form of normality. Where work, family, love, leisure and play was all contained inside those four walls. We shared and interacted with the ‘outside’ world via our screens. As a musician, performer and creator of concert events, like all my peers, I needed to create, to perform and share, that’s the only vocation I know…”

Jarre imagined a live-streamed concert which everyone could join from their own individual bubbles, and ‘Welcome to the Other Side’ was conceived as a title as we all needed to look forward to the end of the tunnel of the global shutdown.

Jarre continues: “A world heritage monument, familiar to the masses, seemed to me an ideal landmark to set the scene. Notre-Dame in Paris is one of the most visited sites for tourists across the globe – it seemed a perfect setting for a New Year’s Eve invitation to travel and celebrate…even if it was just virtually. I designed the concert in 3D virtual reality, but constructed the entire project to share via all possible media available, the VR experience was expanded to a traditional broadcast which could be live-streamed on social media platforms, global TV networks and radio - whoever wanted to join us was welcome…and they did!”

Jarre maintains that these strange times we live in are not only creatively challenging, but also probably the most exciting times to be inventing and shaping the future. Rather than replace any model from the past, it opens the doors to stretch boundaries even further and wider.

‘Welcome to the Other Side’ will be available in the following formats:
Vinyl - Stereo audio version and poster (available September 10)

Digital binaural audio version (available from October 10 on all DSPs)
Email ThisBlogThis!Share to TwitterShare to Facebook