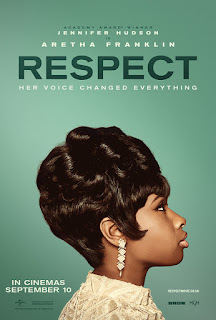 Coming to cinemas on September 10th, get a quick look behind the scenes with the cast and crew at the Aretha Franklin biopic, RESPECT...
Press Release

Following the rise of Aretha Franklin’s career from a child singing in her father’s church’s choir to her international superstardom, RESPECT is the remarkable true story of the music icon’s journey to find her voice.

RESPECT is directed by the renowned American theatre director Liesl Tommy, who also has a strong back catalogue of TV episodes in her directorial repertoire. The screenplay is written by Emmy nominated Tracey Scott Wilson from a story she co-created with Callie Khouri (Thelma and Louise, Nashville, Divine Secrets of the Ya-Ya Sisterhood).
Image - Universal
Email ThisBlogThis!Share to TwitterShare to Facebook