Turn That Noise Down - Seal 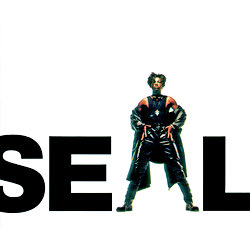 So many well-known albums turn 30 this year and Steve Taylor-Bryant and Susan Omand travel back to 1991 to revisit some of the sounds of their youth that made parents shout "Turn that noise down!" This week, Susan remembers Seal by Seal, no, not that one...

This Seal album by Seal is not to be confused with the other Seal album by Seal that was released in 1994. That album had the Batman Forever related hit Kiss From a Rose that saw him break into the US market. This album was the one that made his name in the UK.

I had fallen in love with Seal’s voice ever since I first heard it in the Adamski single Killer and that song, or a re-recording thereof, is on here. However, every other track on the album is also just as good, if not better and no fewer than five out of the nine songs were released as singles. From the appropriately named, and danceable, The Beginning, through the killer remix of Killer (that lifted strings chord at the end is perfect), the spiritual Future Love Paradise and Crazy to the lingering melancholy of Violet*, it feels like this is a greatest hits album compiled after the fact rather than an incredible album of songs that became hits.

Even the songs that weren’t released as singles are a whole lot more than just filler [so all Killer? – Ed]. Deep Water starts off as a light acoustic summer sound that takes a psychedelic warp. Whirlpool is almost balladlike with another gently acoustic start with a beautiful piano accompaniment undercutting the melody. Wild is not as wild as the name suggests but there are some astonishing chord progressions that make it musically fascinating and a great contrast to the ethereal Show Me that follows it, which takes the tempo right down and turns the bass right up.

My favourite though is Crazy. As well as the simple synth sound and wonderfully distorted wah-wah guitars, it’s the much heftier percussion** behind Seal’s glorious vocal that really sells it for me. And, for once, this is a song that I know the words to and its main hook has become a bit of a mantra to live by:

Because we’re never gonna survive unless we get a little bit crazy.

* Violet is even better imho on the rare “pre-mix” version of the album as there are no movie samples to distract.

** or so I thought until I found this acoustic version when I was looking for the official video. Oh it's definitely that voice.
Email ThisBlogThis!Share to TwitterShare to Facebook