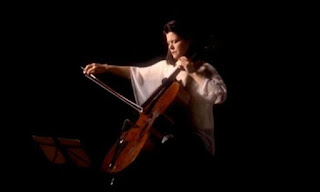 Directed in 2009 by Chantel Akerman this short film (55 minutes) is less a documentary, more a performance topped with an introductory voiceover and then words from the Franco-American cellist Sonia Wieder-Atherton. She talks about how she became a cellist, how she developed her style and what it all means to her. We then get film of her performing music from Monteverdi, Brahms, Schubert and others.

The pre-performance part of the film reminded me that there are drastic differences about the way the French – and possibly all continental Europe – talks about the arts and how the British do. French artists are allowed to be serious. They are allowed to care about what they do and talk about their processes without having to pretend to be all jolly and light-hearted about it. There is, in Britain (and I am generalising like a tabloid columnist here) a tendency to like our artists to not be too serious about their art. That way lies pretention. I am sure Sonia Wieder-Atherton has a sense of humour, but she does not have to demonstrate it ten minutes into a conversation just to appease the audience at home who might start thinking she actually cares about her art.

I am not a musical person. I briefly flirted with learning a large brass instrument at school in Cornwall but soon realised I had neither the talent nor the application to learn it properly.* I never really found myself listening to a lot of classical music until I got older. When I did, I soon realised that I liked one instrument more than the others and that was the cello. There is something about its tone, its ability to deliver emotion, that I find impressive. The violin does it too, but I prefer the cello. It seems more human.

Akerman tries to give these performances some visual interest, playing with the picture within the frame, but I am not sure it matters much. Truthfully, for me, the visual interest is in just watching the playing so that this film becomes like attending an intimate performance. You get to be close enough to see the musicians play, but most importantly you can hear what they are playing.

I am not going to pretend this is a film that will interest everyone. You must have an interest in music and the time to listen. There are not spectacular visual things going on to distract you from the music and if you do not have an interest in hearing an artist talk about their art – for whatever reason – then this is not going to be your cup of tea. I like all these things and if you do you will enjoy this.

Listen to Sonia Wieder-Atherton play the Prelude to Bach's Cello Suite No. 1 below:

*Plus it was large, heavy and a pain in the arse to carry around. **


Find out more about With Sonia Wieder-Atherton and book tickets to watch online here.
Image - Sheffield DocFest
Email ThisBlogThis!Share to TwitterShare to Facebook