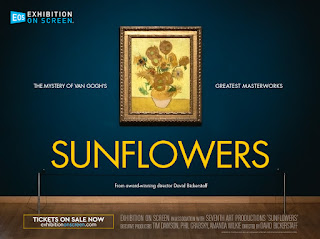 Coming to UK cinemas from next week, thanks to Exhibition On Screen, Daniel White watched the Van Gogh exhibition documentary Sunflowers...

"Van Gogh is the finest painter of them all. Certainly the most popular, great painter of all time. The most beloved, his command of colour most magnificent. He transformed the pain of his tormented life into ecstatic beauty. Pain is easy to portray, but to use your passion and pain to portray the ecstasy and joy and magnificence of our world, no one had ever done it before. Perhaps no one ever will again. To my mind, that strange, wild man who roamed the fields of Provence was not only the world's greatest artist, but also one of the greatest men who ever lived." Vincent And The Doctor - Doctor Who

I'll be honest with you, I am a huge admirer of Van Gogh's work. I love his use of colour, how he painted in a way that no one had ever done before. I have watched the brilliant Leonard Nimoy stage play, Vincent, so many times and the recent film Loving Vincent [reviewed by Ren Zelen here - Ed] was an utterly astonishing emotional experience. Van Gogh sadly didn't manage to conquer his demons and yet I often find myself wondering if his real mental struggles were what enabled him to paint and express himself in such an astonishing way. Van Gogh didn't see the world or the beauty of nature as others saw it and it is this that elevates him to a position higher than any other painter. I have a picture of him in my music studio and his struggles, his battles, inspire me on days when I find it hard to create anything. All of what I have written is true and yet, watching Sunflowers, I realise there are massive gaps in what I know about him and his work. I knew a little about his relationship with Theo and how he struggled to sell any of his work and of course I knew about his struggles with mental health. But when I finished watching David Bickerstaff's breath-taking film I feel like I have fallen even more in love with the man behind the paintings. 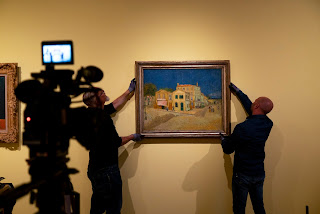 Sunflowers is a feature length documentary built around a special exhibition that was held in the Van Gogh museum in Amsterdam. But it is so much more than a few Van Gogh experts talking about the painter and his work. The documentary is, in itself, a work of art. Even with documentaries that focus on subjects or individuals that I have an interest in, I find that my mind wanders if they are too dry, too intellectual. For me, art must be felt and it provokes an emotional response within me. Bickerstaff and his creative team seem to understand and share this view because Sunflowers is a powerful documentary that informs but also connects with me on a deeply emotional level. The interviews with experts are brilliantly informative (for example, I had no idea that Van Gogh created more than one sunflower painting and that he also painted works of art that focused on dead sunflowers) but they are cut in with incredible scenes shot in Provence and Paris and deepened the connection I feel with Van Gogh. The inclusion of written extracts from Van Gogh's letters to Theo were sensitively directed and the occasional cut scenes featuring an actor playing Van Gogh heightened the emotional connection. This is a film that is more than a documentary because it feels like a love letter from David to Vincent. Van Gogh may not have been successful during his life but his legacy, his fight, lives on to this day and more importantly his art, his creativity will continue to inspire fellow artists and creatives for centuries.

I started this review with a quote from the episode of Doctor Who where a curator for the "mighty" Musee Dorsee is asked to describe what Van Gogh means to him and, because we are talking about a time travelling show, this is delivered within the earshot of Vincent himself. It makes me cry every time! I like to imagine that Vincent would be moved to tears if he knew what an impact his work, his life has had on me and the countless thousands of art lovers around the world. So, thank you David for educating me without patronising, and deepening my love for "that strange, wild man" whose  life continues to inspire and connect with me.
Sunflowers is released in cinemas across the UK from 8th June, including Curzon, Everyman, Odeon, Picturehouse, Showcase, Vue and independent cinemas. Find your nearest cinema at exhibitiononscreen.com
Image - Yellow House installation © David Bickerstaff
Email ThisBlogThis!Share to TwitterShare to Facebook