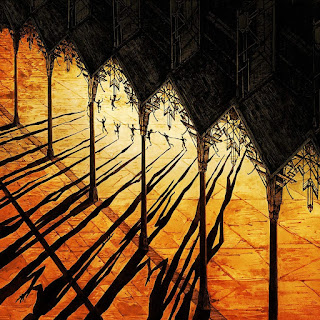 Ruairi B stays awake all night with Lustful Sacraments, the new album out now from Peturbator...

Perturbator is something of a remarkable artist to me. Like many others, I was introduced to the music of James Kent back in the early 2010s (2013 to be exact), when he was just reaching prominence in the retrowave/synthwave niche following the success of films such as Winding-Refn’s Drive and video games such as 2012’s Hotline Miami (the latter of which Perturbator contributed to musically). I was only thirteen years old at the time, and (needless to say) my attitude, maturity, and all those other traits that make us human were very, very different. Through the magnitudinal changes of teenage life, and through all thick-and-thin, I picked up every new release from James Kent from my introduction to him onwards. Other artists from a variety of other genres (be it electronica, metal, synthpop, rock, or anything in between) came and went, but Perturbator stayed, and listening to his albums, I can practically crack each one open and glimpse into a stage of my own developmental period and life so-far. For the uninformed (and from a more neutral perspective), Perturbator has developed from disco-tinged, pounding synthwave (Terror 404, Sexualizer EP) to bombastic, conceptual, aggressive darkwave (Dangerous Days, The Uncanny Valley) to more industrial-tinged experiments as of late (New Model EP).

It’s been over five years since Kent’s last full-length, with his last notable non-single releases being two volumes of B-sides/early material and remixes in 2018. Now, in the turbulent year of 2021, we have Lustful Sacraments, and it feels like it’s been a long time in more ways than one. For starters, gone is the 1980s-style artwork, the scantily clad girls, the retro-futurist imagery, and Verhoeven-style cyborgs. Instead, all have been replaced by a circle of dancing figures half-obscured by gothic arches, their silhouettes elongated, looming through each archway passage. They ritualistically circle a source of light which we, the viewer, don’t get to see, forever left to bask in its mystery, wondering whether it’s a source of divine light and holy salvation in a world of darkness, or something more sinister, evil, and destructive, like a cult-summoned entity of hellfire, ready to explode outwards, consuming the dancers and all surroundings we can see. Judging from the actual sound of the album, it’s most likely the latter.

Because Lustful Sacraments isn’t what you’re expecting sonically should you listen to it without seeing the cover. If the artwork could speak for an album in the grand scheme of Perturbator’s work, then Lustful Sacraments has hit it out of the park. Mystery, atmosphere, Gothicism, sinister musings; they’re all the name of the game now. Perhaps they’ve always been present in Kent’s work, but now it’s truly palpable. The overbearing threat of technology is gone from the album’s themes, as is the bombastic energy and the high-energy car chases. Now, only the evil of the spirit remains, like the survivors of the apocalypse going back to a primitive state, open to original sin and all agony that comes with it. It’s as if the war against Skynet resulted in the destruction of both sides, and the only thing left are cheap thrills and existential hardship. The sounds here don’t conjure up images reminiscent of Blade Runner, but instead Dario Argento’s Suspiria.

Just as I did as a teenager, I stayed up late for the album’s release in the middle of the night, listening to it several times front-to-back until the morning. I wasn’t sure how I felt about the new direction at the time; the album hadn’t quite convinced me. I continued to listen on repeat for days, soaking up all the album is trying to say, and I can safely conclude there’s more to unpack than one might think at first.

Kent hinted at ventures into gothic rock, coldwave, and post-punk with his 2019 single Excess (the third track from the album) and appears to have become enthralled with the concepts and images the song created: hedonistic but lifeless nightclubs, and all the hollow stimulation which can be found within. However, Excess is something of a unique anthem within the album, with no other songs reaching the same kind of speed or energy. The track embodies its name; it’s the excess of the party before the hangover and subsequent consequences.

No, the rest of the album conjures up an image of society collapsing not with an explosion of robots and Akira-esque technology, but with a shallow, self-indulgent whimper. If the introduction track, Reaching Xanadu, is anything to go by, we’re taken on a journey into said society knowing that it’s in its final, darkest days, and nights of toxic “excess” are the only things left; that’s the only “Xanadu” that its people are capable of having. The title track maintains the very same feeling as a more fleshed-out composition. Tracks like Death of The Soul feel more angular and panicked, as if the realisation of what happened the night before has left a single survivor alone amidst a pile of those who chose to die in sybaritism, with much of the album thereafter feeling like the survivors parting the remains of the world, attempting to find a new sense of meaning in the rubble, or perhaps to re-capture the same high from before. Safe to say, it’s very deliberate that Excess is the high-energy point of the record.

Kent’s sound on the album has also found room for more vocalist guests than ever before (including members of Maniac 2121 and Hangman’s Chair as an example), the majority being deep-voiced, brooding, masculine vocals as opposed to the soft-voiced, seductive women Kent has preferred to feature in the past. It would seem Jean-Marie Paillard of OddZoo left quite the impression, with his guest vocals on New Model’s Vantablack sticking in the mind throughout the listen. In the past, James Kent’s relationship with erotic art tied into his belief that the naked, sexualised human body is a source of great power over people. It would seem his gaze has shifted to introspection, holding up a mirror to the male-centric nature of the self-gratifying world he’s painted; quite the thing to do for his most darkest and atmospheric release. The over-analytical might consider it a commentary, but you might just see it as a change of style as a result of a Violator-era Depeche Mode binge. The choice is yours.

Speaking of Depeche Mode, the track Secret Devotion is a must-listen for those who sorely miss the sounds of Music For The Masses and the band’s mid-discography; it’s a tribute in the best kind of way, with Isabel Moreno-Riaño giving a vocal performance that would make Dave Gahan proud.

However, it should be noted that vocals are either mixed very low throughout the record or drenched in reverb, and I have, well, mixed feelings about this. Lyrics seem to be suitably enigmatic from what I can make out, but I can see this making the album’s messages can a little inconclusive on first listen. On the flip side, I can see this as being fully intentional in the hands of an instrumental artist, with the vocals melding into the overall sound as another instrument, perhaps as a representation of humanity losing its voice in the face of the album’s sonic concept.

But, naturally, from the praise I’ve given to songs like Secret Devotion, this isn’t always a flaw. In fact, I feel the addition of vocals throughout the album combined with a more restrained and, dare I say it, mature rendition of Perturbator’s sound is a cocktail that mixes perfectly. Another key highlight would be Cédric Toufouti of doom metal band Hangman’s Chair on the track God’s Plan, a mellow album closer following the penultimate Messalina, Messalina, a more fast-tempo and aggressive grasp for the same energy as Excess, but never quite reaching the same anthemic feel, instead concluding in an inevitable, cataclysmic crash (more evidence that Lustful Sacraments is an exceedingly well-thought-out album conceptually, hinting that the same high from hedonism can’t be achieved again, as if it were the first hit from a class-A drug). God’s Plan ends the album with six minutes of quiet, introspective ambience before a climactic, thundering passage at the end, with Toufouti’s vocals soaring above in true doom metal fashion alongside Kent’s instrumentation. It’s powerful stuff, reflecting more of a personal apocalypse than a physical one.

Needless to say, some of Perturbator’s old horror-synth sounds can be found here, as it can be perceived as a necessary trait to re-visit for a gothic album such as this to be crafted. However, for the most-part, this is a true curveball of an album. I can see this being divisive, and I’m caught in-between. This isn’t the Perturbator I fell in love with, nor is it the one I grew to love even more throughout the holy trinity of I Am The Night, Dangerous Days, and The Uncanny Valley. But, in many ways, I don’t want it to be. New Model proved that Kent has a desire to move his sound forward in any way he sees fit himself, and Lustful Sacraments is a maturely constructed and disciplined effort from the musical auteur. No matter what dedicated listeners might want, this isn’t a regurgitation of a sound that was arguably already perfected on his last couple of full lengths. Would I be happy with The Uncanny Valley Part 2? Yes, I would. But, at the same time, part of me is happy that Lustful Sacraments isn’t that. We already have Dan Terminus, Carpenter Brut, Mega Drive, Power Glove; the aggressive brand of synthwave isn’t going anywhere, it’s just that Perturbator just doesn’t seem intent on keeping the torch.

But, at the same time, I also find myself disappointed that the industrial-electro direction toyed with on New Model hasn’t been truly realised, instead relegated to a brief, isolated release within the catalogue. It’s a sad thing to see, as New Model is arguably one of Kent’s greatest creations. I can see the EP becoming to Perturbator what Irony Is A Dead Scene is to The Dillinger Escape Plan, with a sect of fans forever believing it to be the best thing the artist has ever released, never to be re-captured since. But, if New Model signifies the apocalypse, Lustful Sacraments is the emptiness that follows after; one might see it as the logical next step in Kent’s mind for his music.

Because no matter what your opinion might be on his new direction, Kent has a vision for his craft, as well as integrity as an artist which hasn’t been lost in his growing popularity, and Lustful Sacraments is a considerable achievement in a variety of ways. Some of the things I’ve mentioned are comparable to another article I wrote analysing the themes throughout HEALTH’s Death Magic. In a way, Lustful Sacraments has embodied and conceptualised the same ideas on a grander, more-mature scale with better execution, for the album’s greatest achievement lies in what I said earlier: palpable atmosphere. Just like Kent’s other records, the ability for his instrumentally focused music to paint a vivid concept within your head is commendable, and the visions Lustful Sacraments’ has created might be some of his most powerful material to date, despite not being nearly as bombastic as before. I’m placing forward all my bets that this is a grower, perhaps a grower that will stand amidst some of his best work, given time.

Review Copyright Ruairi B – ©Ruairi B 2021 All rights reserved.