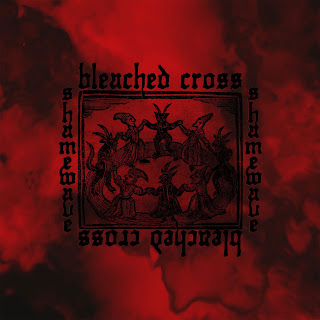 Out today from No Funeral Records, Ruairi B cast an ear over the new split from Bleached Cross + Shamewave...

Operating out of Ontario, No Funeral Records are known within their niche of indie, hardcore, noise, and screamo, acting as a central hub for anything from the post-hardcore experimentation of Albatros to the ever-familiar harsh noise of Merzbow. This month, two new faces appear on their catalogue on a shoegaze-focused split: Illinois’ Bleached Cross and Wisconsin’s Shamewave.

This upcoming release grabbed my interest once I heard that Bleached Cross featured members from screamo band Frail Body, who released the outstanding full-length, A Brief Memoriam, in 2019, a record tackling themes of bereavement and loss, along with the cacophony of sorrow that follow it. It’s a record that has remained in the mind of post-hardcore/skramz for over two years, with some holding in the same regard as Pianos Become The Teeth’s The Lack Long After or Touché Amoré’s Stage Four. For those who know how revered those albums are in their respective circles, that’s quite a feat. From the searing vocals to the proficient riffing that bears comparison to bands such as Envy or City of Caterpillar, it’s a record deserving of a discussion in itself, but I’ll shelve that for the time being in order to focus on the release at hand. 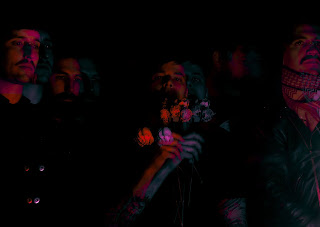 So, what exactly is Bleached Cross’ direction opposed to Frail Body’s? No Funeral Records state the band “evoke the aggression of screamo and hardcore through a lens of post punk, dark wave, and shoegaze”, with the expected usage of reverb-drenched guitars and heavy distortion. From the melodies that kick in on the band’s first track, Grave Pact, immediate comparisons can be made to No Devotion, the alternative rock/pop band formed by Geoff Rickly and the remnants of the tarnished Lost Prophets, only this time with much rougher production to make it feel more shoegaze-y. I feel there’s a certain sound that encompasses the “rock/punk musician goes dream pop” project, and Bleached Cross certainly feels like it, with the overt angst, pulsing drums, and the flip-flop between anthemic synths to biting guitar distortion.

However, a point of contention here is whether it was a good idea for Bleached Cross to use harsh, screamed vocals a la Frail Body for additional edge. In this case, I’m going to go with a firm no. This isn’t comparable to Alcest’s style of shoegaze (which utilises harsh vocals very well), and there’s a reason Rickly didn’t weave any screams in the verses of, say, Permanent Sunlight, and that’s because they stand at complete odds with the song’s respective sound, and it’s a near-impossible task to make it work. On the subject of style clashes, this isn’t just attributed to the usage of harsh vocals; Grave Pact generally feels like a mess, with its uplifting, 30 Seconds To Mars-esque chorus that crops in after down-tuned, chugging pre-chorus build ups where the guitar tone get’s a bit too fuzzy for its own good. And, no, dragging out this build-up for even longer in the song’s third act with added squeal-harmonics doesn’t solve the problem. Raw production is something of a norm for shoegaze but acts as a bullet in the foot for a song constructed in a sonically tone-shifting way such as this.

Things improve slightly with the following track, Soul Bleed, which features a much more coherent and enjoyable shoegaze sound in the song’s first half, the drums in particular having a certain metallic, industrial edge to them this time round. Combined with the mixing of the bass and guitars, I can safely say this is a considerable improvement. This continues into the pre-chorus build up, which acts as a highlight for Bleached Cross’ side, escalating from solemn, clean guitars into a building cascade of synths and thumping drums as the ethereal vocals soar; it truly grabs your attention. Unfortunately, this is without reward, as we segment into the climax without a satisfying hook. If this wasn’t bad enough, said climax is comprised of muddy blast-beats and a mess of guitars and synths, with the harsh vocals coming back without feeling like they truly belong there when the regular cleans do a fine enough job. I understand that shoegaze is intended to be an exceedingly noisy genre, but it doesn’t need to sound like a sonic mess without any distinguishable melody. Shoegaze, to me, is tangible emotion through a clouded mind, and this is very much the latter without the former.

The main issue with Bleached Cross is that, with everything from their misleading, medieval-gothic artwork, to their needlessly edgy song titles, to their actual sound as a band, this feels like an ill-found experiment in clashing styles together, like a toddler removing the head from a Barbie and replacing it with a triceratops. Is it cute? Perhaps, but it certainly won’t catch on, especially when the likes of No Devotion, Nothing, and the latter discography of Frank Carter & The Rattlesnakes have shown that you can have roots in punk/hardcore and move to alternative rock, pop, and shoegaze without sounding like a shambles. It’s as if Bleached Cross want to create a similar sound to said projects, but also want to desperately assure us that they’re a screamo band at the same time, and I really don’t see this current sound going anywhere beyond the demo/split-phase purgatory of the band’s discography without an overhaul in general maturity. 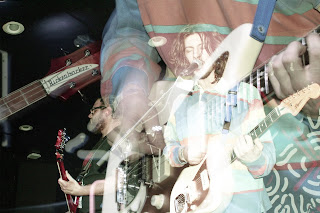 This brings us on to Shamewave, who were marketed by No Funeral Records as a band that plays “traditional shoegaze with extreme technical proficiency”. Ah, yes, shoegaze, a genre known for its Metheney-tier precision and technical prowess, as opposed to a wall of haze and distortion with effects pedals being just as important as the instruments themselves. As said by Brandon Setta from the aforementioned shoegaze-powerhouse Nothing (in an interview regarding Guilty of Everything in 2014): “it took me all day long to record any guitars with super-clean tone”.

Marketing misunderstandings aside, how is Shamewave’s side in comparison to Bleached Cross? For the band’s first track, Ballerina, electronic noise is the name of the game, with the general soundscape having a very “digitised” flavour to it, as if the band were being broadcast through the undulating television from Cronenberg’s Videodrome. A niche description, maybe, but it’s the image that comes to mind, and the mere fact that the track can conjure it up is to its credit. The real standout here are the vocals, which truly sound like buzzsaws humming at varying pitches as the song progresses, so much so that, at first, I believed them to be a different instrument entirely. As opposed to Bleached Cross, the lo-fi, overbearing rawness of the production works in tandem to create a track worthy of the genre.

Unfortunately, I can’t laud Shamewave’s following track, Situation Stun Gun. I might have critiqued Bleached Cross for their experimental blunders, but at the very least there was some ambition and listener intrigue present (for better or worse). Situation Stun Gun has the opposite problem; this is about as forgettable as it comes. By-the-numbers grunge riffs, wearisome songwriting, and a lack of interesting effects or sonic explorations combine together to create something that should’ve stayed in the nineties; it’s practically catatonic with how derivate it is. It’s up to you to decide which musical approach is worse, but I’m more inclined to think the latter. Still, at least we have Ballerina, which takes the award as the split highlight.

Bleached Cross and Shamewave have come together with an immensely inconsistent release, but that’s not to say there aren’t highlights. Bleached Cross have attempted a somewhat misguided dichotomy that contradicts itself, leading to an initial track that I have no will to re-visit, and a second track that builds well but lacks payoff. Shamewave, on the other hand, have crafted an excellent, atmospheric song, then followed-up with an uninspired, grunge-throwback slog. Either way, I suppose it’s best to keep these less-than stellar compositions within splits and demos as opposed to more complete EPs and full-lengths. In regard to that, there’s no telling where these projects will go from here on. I hope for the best.

digital streaming on day of release: https://nofuneralsound.bandcamp.com/album/bleached-cross-shamewave
Email ThisBlogThis!Share to TwitterShare to Facebook