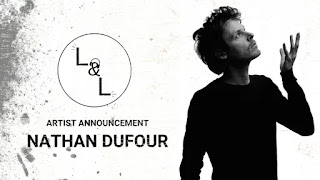 Nathan is known worldwide for his concise and entertaining explanations of philosophical theory through rap (see An Introduction To Critical Theory For The 21st Century), and as one half of the ecologically attentive Hip-Hop duo Nate and Hila (see Compost).

Yet fewer people are aware of the other side to Nathan Dufour’s music as Label Manager Mike Five explains “Whilst his insightful soliloquies and socially responsible musings are unparalleled in his field, fewer people are privy to the more personal side of Nathan’s music. Despite its minimal exposure, 2020’s Nathanologies Vol. 1 was a truly special moment in the canon of independent music, combining elements of Hip-Hop and Folk music to develop personal narratives and reflections on life and the world around him.

"We’re now working with Nate to build on this foundation and amplify his brilliant and unique perspective on things with some intriguing new projects in the pipeline.”

On signing to Lights And Lines Nathan said, “Lights and Lines is taking an approach to music releasing that honours the qualitative over the quantitative, cultivating a deep listening experience by emphasizing songwriters' narratives, the physicality of the release, and the holism of the audience's musical encounter.

"In this modern climate of distribution, where the superabundance of what's available outstrips one's ability to truly connect with any of it, Lights and Lines is doubling down on the classic, simple gesture of sitting with an album and getting to know the person who shines through its sound.”

Thinking back on his own experiences of exploring music beyond the listening experience Nathan reflects:

“It was moments like that - hunched over my bedroom desk listening to the same CDs repeatedly, thumbing through their lyric books like maps of a place I would one day live -- that form my earliest memories of my passion for songwriting and recording. My current creations are still connected to that memory.

And so teaming up with Lights and Lines is a kind of homecoming moment, where I acknowledge that my albums are little books, requiring care and time from both writer and reader -- and it's time to get back to tending, and adding to, that real, physical library.”
Listen to Nate's latest philosophical track - everything you ever wanted to know about ... being a Stoic?

The label is currently running a crowdfunding campaign as part of its launch in order to raise awareness and attract music lovers to the new imprint. The campaign includes some generous subscription options, and features the first in a series of t-shirt designs voted for by Mike Five’s 10k+ Twitter followers.

You can find out more about the label’s vision and get your hands on some fantastic merch through the campaign - which has impressively reached its ambitious goal with nearly a week to go - here.
Email ThisBlogThis!Share to TwitterShare to Facebook