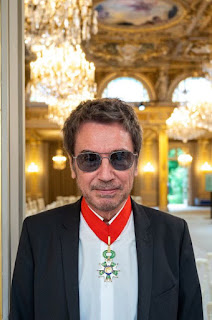 For the first time, electronic music filled the Cour d’honneur courtyard of the Elysée presidential palace in Paris as Jean-Michel Jarre took to the stage after being honoured by President Macron. Watch Jarre's performance ...

Jean-Michel Jarre brought together an inter-generational stage, performing to an audience of young Culture Pass holders, as part of the Fête de la Musique festival. Strict Covid measures did not prevent an electrifying atmosphere as live music returned to the city. The event was streamed live across social networks, attracting a global audience.

Jean-Michel Jarre said: “After so long apart, it was wonderful to spend a special evening with a real-life audience. We shared these good vibes with everyone around the world via the livestream, and I know we will all be together again soon. Thank you to all the artists who performed, it was a night I will never forget.” 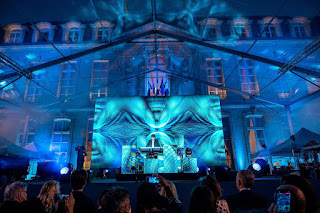 The French composer, performer, producer, visionary, innovator, cultural ambassador Jean-Michel Jarre is recognized worldwide as one of the pioneers of electronic music. His innovative approach to the visual and highly technological staging of electronic music has paved the way for this culture to flourish worldwide through renowned festivals. He continues to break new ground with each piece of music and live performance. With technology at the forefront of everything he does, Jarre quotes today as “the most exciting time to make music.”
His current catalogue, which includes 21 studio albums, has generated sales of more than 85 million albums worldwide. Jarre has also set records in the Guinness Book of Records through the exceptional participation of the public at his concerts in several emblematic sites around the world: 1m Place de la Concorde (1979), 1.3m Houston, Texas (1986), 2.5m Paris-La Défense (1990), 3.5m Moscow (1997). Throughout his career Jarre played some of the most exciting landmarks around the globe: He was the first western musician ever to be invited to perform in post-Mao China, and has also played the likes of the Great Pyramids in Egypt, The Sahara Desert, The Eiffel Tower and the Dead Sea. At the start of 2021, he live-streamed a performance from a virtual reality Notre Dame, which drew a record-smashing global audience of over 75 million viewers.

Jarre has long been UNESCO's ambassador for education, science and culture, an unconditional defender of the environment and winner of the Stephen Hawking Medal for scientific communication.