News - Glastonbury Weekender at the V&A 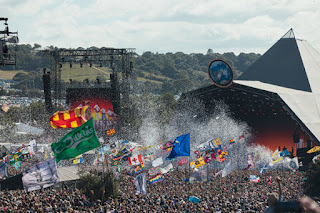 London's V&A is to host a three-day Glastonbury Weekender featuring a virtual conference, a new interactive database, and installations inspired by the Festival archive...

From 25th to 27th June, the V&A will host a three-day Glastonbury Weekender featuring a mix of digital experiences and in museum events and installations. This free programme builds on the V&A’s Glastonbury @ 50 research project that launched last year, delivered in partnership with the Arts and Humanities Research Council (AHRC), part of UK Research and Innovation (UKRI).

Starting on 25th June, a one-day virtual conference will feature unrivalled insight into the unseen world and history of Glastonbury. Featuring collaborators, co-creators from the festival together with scholars in festival culture, this exclusive conference will go behind the stage to explore the evolution and influence of this world-famous festival. Speakers include Head of Events at Greenpeace Bob Wilson, Founder and Creative Director of Arcadia Pip Rush, artist and Founder of Mutoid Waste Company Joe Rush, Founder of the Kidzfield Tony Cordy, artist and geographer Luke Piper, Dr Roxy Robinson and Dr Beatriz Garcia.

The Glastonbury Weekender running 26th -27th June includes responses to the Glastonbury Archive by artists, designers and students creating new, interdisciplinary work which champions the resilience of the performing arts in the wake of the last year and celebrates the extraordinary significance of the festival’s social and cultural impact.

An immersive video experience that explores the landscape, mapping, history, and experience of attending Glastonbury will take place in the museum’s Lecture Theatre, as the V&A Glastonbury film archive is intertwined with memories and photographs from festival goers and collaborators.

In the museum’s iconic Raphael Gallery, a programme of classical and contemporary orchestral music will explore the landscape and mythology of the Glastonbury site. A selection of spoken word interpretations, soundscapes and moving image pieces inspired by festival culture, from students at London’s South Bank University, will be on display in the museum and online. Festival favourites the Kidzfield will bring fun family activities to the V&A garden over the weekend.

The weekend will also see the launch of Mapping Glastonbury, the V&A’s Interactive Map of the festival, made possible by funding from the AHRC. Created by digital studio We are Freak, this online digital experience of Glastonbury Festival enables the public to explore the evolution and growth of the Festival across five decades. The map invites users to discover stories, memories, objects, sounds and images, many collected following the V&A’s open call out in June last year.
Highlights include hundreds of photographs, memories and oral histories collected from the public, new soundscapes and film experiences, all newly digitised to create unprecedented access. Original programmes, posters and additional objects have also been added from the museum’s Glastonbury Archive providing new ways for people to engage with the archive and the Festival history from all over the world. Glastonbury Mapping is part of wider database project which will enable audiences to search Glastonbury’s performance history across the stages and the years. 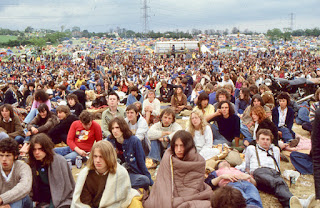 This weekender forms part of a pilot research collaboration between AHRC and the V&A that will research and archive artefacts, stories and the history of Glastonbury Festival in order to increase our understanding and appreciation of this iconic cultural event. The fully searchable database will be available to researchers and the public and will facilitate new research which will shed new light on the profound impact of Glastonbury Festival.

Kate Bailey, Senior Curator of Theatre and Performance said, “Glastonbury Festival’s rich and diverse archive is an incredible resource and reflects over fifty years of performance history capturing social, cultural and political change. Festival organisers have paved the way for global festival culture and since its inception have driven awareness of environmental issues while enabling limitless creative expression.

“We hugely miss the shared and collective experience of festivals but this AHRC project is a great opportunity to celebrate the unique ethos of Glastonbury, its extraordinary impact, and ongoing influence, and provides a platform for practitioners to create innovative new work inspired by the V&A collections.”

Professor Christopher Smith, AHRC Executive Chair added “We are delighted to partner with the V&A on this exciting weekend which showcases both Glastonbury and the joint work of AHRC and V&A to archive and research over half a century of this cherished event. “Glastonbury Festival has been a hugely significant date in the cultural calendar for more than 50 years, having an influence on many areas of life from music to politics, fashion to society. The absence of live performance has been sorely missed during the pandemic and we hope that by sharing our research into the history and the impact of Glastonbury, we will enable people to immerse themselves in the festival once again and enjoy a new kind of collective experience. It offers all of us an opportunity to celebrate the performing arts and to recognise – and to experience again - the important role of culture in our lives.”

In 2014, the V&A became the home to the Glastonbury archive for the nation. Documenting the cultural importance of the world’s leading performance Festival, the collection brings together posters, stage designs, costumes, interviews, films and other memorabilia to safeguard the history and enable the continuing documentation of the Festival today.

As part of this work, the V&A has also collected personal memories from those that have attended the Festival. Starting in June last year, the V&A announced a call for audience memories, and this will continue to form an important part of the archive as it grows in future years.

In partnership with the AHRC, part of UK Research and Innovation (UKRI), work has begun to make these artefacts, stories and the history of Glastonbury Festival accessible via the new digital database. This open sourcing of material has enabled us to create the first fully searchable database of Glastonbury, enabling users to navigate and trace the rich performance history of the Festival across time, stages and performers.