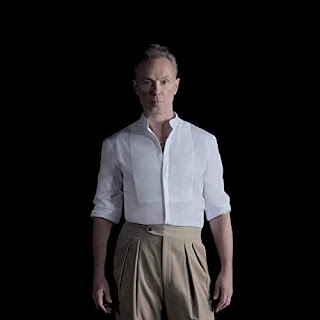 Gary Kemp has released the latest single from his forthcoming album, INSOLO which comes out on July 16th thanks to Columbia Records. Listen to the Bowie-inspired Waiting For The Band...

INSOLO will be the second solo album by Spandau Ballet's songwriter and Saucerful Of Secrets guitarist and co-lead vocalist, Gary Kemp and Waiting For the Band is the third single to be released from it, following Ahead Of The Game and Too Much.

The song was partly inspired by Gary attending two pivotal David Bowie shows in 1973; July’s final Ziggy Stardust show at Hammersmith Odeon and filming for the 1980 Floorshow at The Marquee in October.

Gary Kemp said, “In this song I wanted to capture those teenage feelings that I had as a fan of music, of artists and bands, the anticipation of seeing them, I tried to capture that heady feeling, the thrill of being a disciple in the hunt for a hero. In the middle section of the song the protagonist - me - walks into the venue, heads into the pool of light in front of the stage and feels that sense of rising euphoria. In my head it was Hammersmith Odeon in 1973 and I was about to watch Bowie come on, but it could be any artist that ever turned you on, striding out onto the stage.”

One of the musicians that played with David Bowie on that fateful night in Summer 1973, the pianist Mike Garson, appears on a forthcoming remix of Waiting For The Band by the Progressive artist and producer Steven Wilson.
Gary continued, “I’m still waiting for that feeling to happen again waiting for that band, for him, her or them to come into my view and thrill me to the core, it’s never left me. It almost gets me through the day, the thought that those thrills might still lie ahead. Is that a feeling of nostalgia for music? For lost friends? Or just for lost youth? Whatever it is, I’m still deeply aware of it and wanted to tell it in song. As I began recording the song, I stumbled on some old footage of Bowie fans outside Earl’s Court in 1978 being interviewed before the show. I took some of their comments and placed them under the track. They bubbled up like ghosts, turning forever in their moment. There’s something about adding music to real events that fills them with poignancy, sadness. Their voices left me emotional. It was lost youth.”

Twenty-five years on from his solo debut Little Bruises, Gary has written and produced an album that focuses on two dominant themes: the paradox of solitude in an urban landscape, and his growing obsession with life seen through a rear-view mirror and how the past infects our present.

Waiting for the Band (Gary Kemp)

Running up the backstreets
Looking for the stage-door
Laughing ‘cause we felt so high
Imagining their shadows
Hoping that we’d see more
So crazy, we could touch the sky

Walking up the backstreets
Searching for their shadows
Some have left forever now
Did I really love you?
Was it real?
Well, who knows
The ghosts still play here anyhow