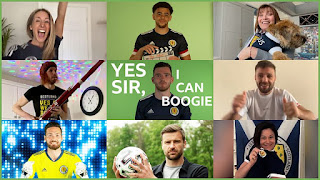 The Euros kick off today and the Scotland team have joined in with a new version of their unofficial anthem, the classic Baccara disco hit Yes Sir I Can Boogie, by *checks notes* The BBC Scottish Symphony Orchestra?! Here's the video...

Eilidh Barbour, who joins the BBC’s Euros 2020 presenting line-up, says: "I just can’t wait to see Scotland walk out of the tunnel at Hampden Park to take their place amongst the top European nations in a major championship. It has been such a long wait, but we are back to boogie on the big stage once again. The BBC Scottish Symphony Orchestra video captures the feeling around the country, that special night in Serbia, with a song that has become an unofficial anthem. Thank you for that Andrew Considine and come on Scotland!"

Dominic Parker, director of the BBC Scottish Symphony Orchestra, adds: “Baccara makes a bit of a change from Beethoven for our players but we know they can turn their musical (and dressing up) skills to any situation. To get involvement from the Scotland team was amazing and to have some more famous faces join us has been great. We’re thrilled to be supporting the national team in this way and we hope everyone enjoys it.”
BBC Scotland is covering every kick of the ball with Euro 2020 coverage across television, radio and online. For details of coverage and related content visit: www.bbc.co.uk/scotlandeuros
Image - BBC
Email ThisBlogThis!Share to TwitterShare to Facebook