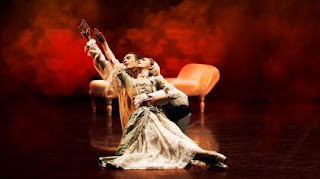 Following successful cinema screenings of their adaptations of Dracula and Victoria, Northern Ballet makes a return to cinema with another full-length ballet in September, David Nixon OBE’s Dangerous Liaisons. Watch the trailer...

Northern Ballet are once again partnering with CinemaLive, leading producers and distributors of event cinema, to give audiences the opportunity to see this thrilling production up close on the big screen. The film is set to be shown in more than 200 cinemas throughout the UK from 14 September 2021, followed by screenings across Europe, then North America next year.

Dangerous Liaisons, inspired by the original novel by Pierre Choderlos de Laclos, tells the tale of two bored aristocrats as they spin a web of heartbreak and ruin. This dramatic ballet is choreographed by David Nixon OBE and performed to Vivaldi’s rousing composition of The Four Seasons, played by Northern Ballet Sinfonia.

Northern Ballet’s Dangerous Liaisons was captured for film in October 2020 during performances at Leeds Playhouse. Uniquely it was filmed and edited entirely in-house by members of the Company with direction for film by Artistic Director of Digital Kenneth Tindall and Northern Ballet First Soloist Riku Ito stepping behind-the-scenes as lead camera operator. Creative Content Producer Emily Nuttall edited the film as part of the Company’s commitment to upskilling its staff and expanding its digital offering.

Artistic Director David Nixon OBE said: ‘I am delighted that Dangerous Liaisons will be screened in cinemas, bringing ballet to new audiences across the country. This is the third of our full-length ballets to be shown in cinema and the fact that the ballet was captured and edited in-house shows the growth and strength of our in-house digital team, which included one of our dancers, under the direction of Kenneth Tindall. We continue to be committed to bringing ballet to as many people as possible, through our live performances, online and TV presence and cinema screenings.’

John Travers, Head of Acquisitions & Distribution for CinemaLive added 'We’re excited to be working in partnership with Northern Ballet to provide a wider audience with access to their incredible ballets through their local cinema. Their innovative approach to story-telling looks beyond traditional ballet titles and we are proud to bring this unique and inventive content to the big screen. We look forward to seeing their production of Dangerous Liaisons connecting with cinema audiences across the UK and Europe later this year and in North America in 2022.'