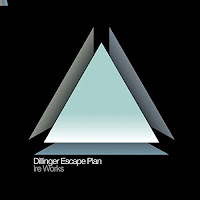 For Educating Omand, Susan Omand has been listening to music that she missed out on first time round. This year, our team of writers suggest albums for her to listen to in Educating Omand: Gap Year. This week, she listens to Ire Works, suggested by Ruairi B...

When Ruairi B suggests an album to listen to, I take heed. When he says the album “completely changed the way I looked at music” then… well, then I start to worry. I’ve been, let’s say, less than enamoured with some albums this year that people have professed to be “life changing.” So, somewhat daunted, I headed in to Ire Works by The Dillinger Escape Plan.

Listening to the opening track, Fix Your Face, honestly did little to undaunt me. It wasn’t awful – good guitar, with much string widdling in the lead and a more complex bassline than I expected – it was just a little… meh.

Lurch came next and I’m afraid my initial reaction was that it was “just noise.” However, there was a real curveball thrown near the end of that track with completely unexpected piano. That made me sit up and take notice.

I was right to start taking notice because Black Bubblegum is a very decent rock track indeed. I loved the vocal on this, the falsetto works incredibly well. Add in some intricate syncopation in the rhythm and an oh so sixties Hammond Organ and this got marked up as favourite on the album so far.

However, Sick on Sunday then became my favourite as soon as I heard it. And that’s before the freaky clicky bleepy noises kick in! I loved the retro noir sound, with the vintage fairground feel being very unsettling. There’s just so much going on.

When Acting as a Particle comes next and it changes tack slightly but still absolutely makes the favourites list with stunning bell sounds and gorgeously disconcerting strings added into the mix. Then…

Then, we’re back to “just noise” with Nong Eye Gong and this signals the start of an unexceptional patch on the album for me. The complex time signature and disorientating guitars lift the next track When Acting as a Wave slightly above complete meh but I can’t find anything to like about 82588. Hmmm.

Milk Lizard, however, is fantastic. A proper rock and roll bassline, some surprising piano again and I love love love the brass. There’s a real Dick Tracy movie feel about it and this is a real contender for favourite.

Party Smasher completely lives up to its name and totally smashes the mood. Yes, the widdly guitar is impressively widdly but the thunka rAaAaAr style that I abhor so much pulls it right down in my estimation to the point that it got skipped halfway through the first listen.

Dead as History is wonderful though. Very spooky with atmospheric piano and wind soundscaping in the intro, my notes on listening to it the first time says “ethereal with frog noises” but that really is the only way I can describe it and the generally dark feel of the track means it’s another one on the favourites list.

Horse Hunter threatens another dip in the ratings with a noisy start and a fairly mediocre end but it is nearly saved by the superb jazz-like guitar and counterpointed vocal melody midway through.

Mouth of Ghosts rounds out the album and the stunning piano in this after a glorious smoky jazz-club start is mind-blowing, making this a six-minute masterpiece of a finale.

So yeah, this is a real roller-coaster of an album. The songs seem to swing from wonderful to awful and I can’t tell if it’s intentional or not as there’s no pattern to it. The highs are real highs though, to balance out the utter trash. Is it a life-changing album? Not for me, but I do admit that there are some fascinating songs on here that I really didn’t expect when I started listening to the album and for that reason, I am definitely educated this time. The difficult decision is though, which of the multiple “that’s my favourite” tracks really did end up as my favourite? Looking back over my notes there are six tracks in contention (yup, just under half of the songs on the album are up there – the rest of the songs now get skipped over with subsequent listens). However, each time I listen now, my favourite changes, which I guess is no bad thing at all.