Turn That Noise Down - Hole 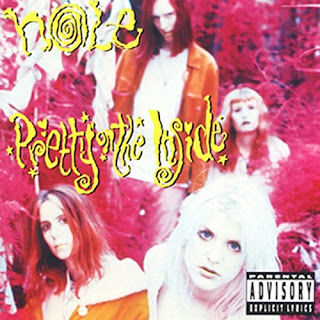 So many well-known albums turn 30 this year and Steve Taylor-Bryant and Susan Omand travel back to 1991 to revisit some of the sounds of their youth that made parents shout "Turn that noise down!" This week, Steve is Pretty on the Inside...

Hole were a great band early on. I’ll stand by that statement anytime. Yes, in later years, the sound changed and maybe became a bit commercial for some, and most definitely the hype and media intrigue that followed Courtney Love around, whilst she was married to Kurt Cobain and for a few years after his untimely passing, detracted somewhat from a band that knew how to play with energy and style. If you can somehow forget who Courtney Love is and all the baggage that surrounds her and just concentrate on the eleven songs that make up 1991’s Pretty on the Inside then you can have a rather enjoyable hour or so. If you can’t and if your hatred of Love is that ingrained then, well, I can’t blame you but I have a job to do and I love this record.

Pretty on the Inside encapsulates all I felt around that time. It’s powerful, angry, dirty, full of energy with only bad places to spend it, it’s as painful as it is compelling. For a grunge slash punk band before the era had completely taken off to produce this level of emotion and match them with superb production levels is just astounding and Pretty on the Inside holds up well thirty years later. There’s a couple of duff tracks but, on the whole [I see what you did there - Ed] it’s an album that screams into your soul and holds a mirror up to your fears.

Teenage Whore, Pretty on the Inside, and Babydoll are still powerful both musically and lyrically and, whilst I like Sassy and Mrs Jones, they don’t resonate as they once did. Unlike other albums though there is no filler, there is no pretence, every song is in the moment and meant and, whether you like every track or not, you have to respect what went into producing them. Love and her cohorts were a stunning ensemble that maybe took that hype and lifestyle to places they shouldn’t but we’ll always have Pretty on the Inside.