Turn That Noise Down - EMF 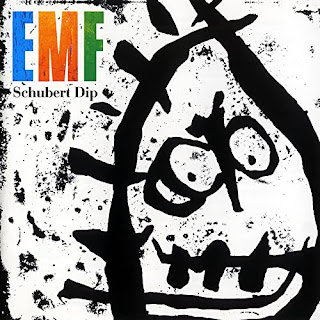 So many well-known albums turn 30 this year and Steve Taylor-Bryant and Susan Omand travel back to 1991 to revisit some of the sounds of their youth that made parents shout "Turn that noise down!" This week, Susan has some Schubert Dip...

It’s unbelievable [I see what you did there – Ed] that Schubert Dip, the debut album by EMF, is now 30 years old. It’s even more unbelievable [OK, stop now – Ed] that I haven’t listened to it in about 29 of those thirty years.

Everybody who was around at the time, or near a nightclub dancefloor for the next ten years, knows at least one EMF song and that song is on here. But its phenomenal success has overshadowed the musically interesting selection that makes up the rest of the tracklist and those definitely bear a second listen, with the benefit of three decades distance. From the police sirens on Children to the swearing and beatitudes on the live-sounding Longtime, there’s something a little out of the ordinary going on in every song.

When You’re Mine has a catchy piano riff while the almost balladlike Travelling Not Running uses an interesting sample from Radio Three, referencing the eponymous Schubert of course. I Believe has an almost chantlike chorus contrasting with Girl of an Age, which is introduced by a Muppet and has some disquieting lyrics. Admit It reminds me of Depeche Mode’s Just Can’t Get Enough from ten years earlier and Lies is very Pet Shop Boys’ It’s a Sin with those echoing vocals in the background – I can really imagine it in Neil Tennant’s voice.

My favourite track, listening to it again now, is probably Long Summer Days. The hopped-up hippy-ness of it works so well. It’s California Dreaming mixed with electronic drums and muddy, bendy guitars, all overlaid with a North African vibe. But, back in the day, I really wasn’t bothered about all that, oh no. All I wanted to do was dance.