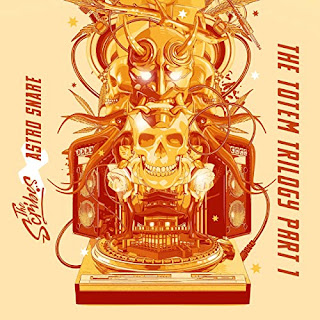 The Scribes are back with a post-lockdown relaunch of I'm Back, the lead single taken from their latest 5 track EP The Totem Trilogy Part 1 which was released on Quill Equipped Records on April 13th...

Multi-award winning UK hip hop act The Scribes and Chicago raised producer Astro Snare are celebrating the easing of lockdown in the UK with the official relaunch of their new music video I’m Back featuring UK legend MC Duke.

I'm Back is a heartfelt tribute to the golden age of hip hop, with Astro Snare’s trademark funk-heavy boom bap production providing the perfect backdrop for his long awaited return to the mic, delivering a catchy hook in the mould of rap classics from a bygone era and a verse full of imagery and metaphor.

The track is also blessed by The Scribes lyricists Jonny Steele and Ill Literate, bringing the unique brand of raucous wordplay that has seen them become festival favourites across the UK, all delivered with the limitless energy that the group are known for.

Arguably most exciting of all, I’m Back features founding father of the UK hip hop scene MC Duke, effortlessly continuing the old school vibe of the piece with 16 bars of vintage flow, finishing the track off with the style and swag of a true legend.

The stark visuals come courtesy of videographer Alex Rogers who worked with the artists in an abandoned warehouse on the outskirts of London to produce the cinematic video, flawlessly echoing the sentiment of the track while capturing the golden age hip hop essence running throughout the release.

I’m Back sets the bar for the artist’s future releases, with a polished sound and epic cinematography that come together to create a timeless tribute to the real, original hip hop.
"The Totem Trilogy Part 1" EP feat MC Duke is OUT NOW on CD & digital (find it on Bandcamp here)
Image - The Scribes
Email ThisBlogThis!Share to TwitterShare to Facebook