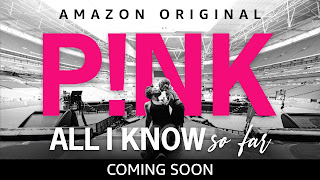 A behind-the-scenes look at P!NK as she balances family and life on the road, leading up to her first Wembley Stadium performance on 2019’s “Beautiful Trauma” world tour, watch the trailer for All I Know So Far, coming to Amazon Prime Video on 21st May...

Join award-winning musician P!NK as she embarks on her record-breaking 2019 “Beautiful Trauma” world tour and welcomes audiences to join her chosen family while trying to balance being a mom, a wife, a boss and a performer. Mixing footage from the road, behind-the-scenes interviews and personal material, director Michael Gracey (The Greatest Showman) gives audiences a glimpse behind the curtain of the circus that she calls life.

21st May also sees the release of the album of the TV show of the tour... here's the first single from it. All I Know So Far
Image - Amazon
Email ThisBlogThis!Share to TwitterShare to Facebook