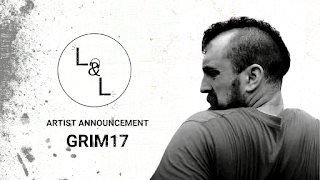 The future is looking GRIM indeed as Brighton-based record label Lights And Lines are "absolutely made up to be working with one of the finest lyricists and unique musical artists in modern times" GRIM17 ...
Press Release
After briefly working with artists like Tom Middleton and Neil Cowley Trio, GRIM17 went on to appear on Ireland's leading Music TV show Other Voices, and be tipped by the Daily Mirror as ‘One To Watch’ in 2014, before taking an unprecedented 5 year break away from music…

If that wasn’t punk enough for you GRIM17 then came back with a bang in 2020 while the rest of the world fell to its knees, releasing 2 brand new albums independently, bringing popular and critical acclaim to his work once again.

GRIM17’s back catalogue includes nods to a variety of Electro, Alternative, Folk, and Industrial influences whilst maintaining his own unquestionable independence and unique style across everything he does.

Label Manager and long term fan, Mike Five, had this to say about the partnership:

“One of the most amazing things about starting the label has been the willingness of the artists I’ve admired for a long time to get on board with the idea.

I first heard GRIM17 about 6 years ago - his unique voice and exquisite lyrical style, combined with the beautiful darkness his music encapsulates so perfectly was an instant winner for me. It is therefore an absolute pleasure and a privilege to be working together all these years later.”

Fiercely independent to the core Grim was surprised when we approached him, stating:

“I was just minding my own business in my cave trying to decide if I should embark on an epic quest to defeat some formless evil by destroying an amulet, or forging an amulet, or something - I wasn’t really paying attention...

Then Mike came along coaxing me out with promises of public belly rubs... and the erstwhile spreading of my cacophonous misery to everyone his messianic tendrils can touch.”

They thought things might get a bit weird after that but instead the conversation ended abruptly when Grim - unprompted - turned away and shouted “Grim17 is my name, and I came to convert my impotent frustration into sonic assault!” [Nope, not weird at all then - Ed]
Listen to GRIM17's latest single Practised Taunts below [then go find his cover of The Air That I Breathe which is AWESOME - Ed]

Lights and Lines is currently running a crowdfunding campaign as part of its launch to raise awareness and attract music lovers to the new imprint. The campaign includes some generous subscription options, and features the first in a series of t-shirt designs voted for by Mike Five’s 10k+ Twitter followers.

You can find out more about the label’s vision and the campaign itself - which has now reached over 2 thirds of its goal with just over a week to go - here.

For more information on the Grim17 / Lights And Lines partnership and other label news see the Lights and Lines website.
Image & info - Lights and Lines
Email ThisBlogThis!Share to TwitterShare to Facebook