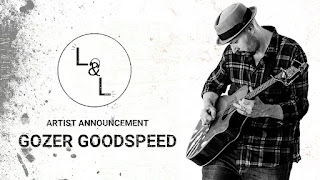 "A unique voice for a unique label." In case you missed yesterday's announcement, singer/ songwriter Gozer Goodspeed has signed to the new music collective and record label Lights And Lines...

As you know, if you've been following AlbieMedia for any length of time at all, we've been following [Note: NOT stalking - Ed] Mr Goodspeed and his music for a few years now, so we were very excited to receive the following press release yesterday:

"Lights And Lines are delighted to be able to make our first artist announcement… We’re excited, inspired, and honoured to be entering a partnership with Plymouth-based singer/songwriter Gozer Goodspeed, with some amazing future projects in the pipeline to be announced in full very soon!

Gozer Goodspeed's songwriting is unique - he tells tales of fortune, hope, sadness, and loss in a way that feels entirely his own, and yet wholly relatable to everyone.

Weaving elements of folk, blues, rock and psychedelia together across an impressive back catalogue of EPs and albums, Gozer is no stranger to making music characterised by the way it makes you feel, rather than the category you put it into.

Label Manager Mike Five is thrilled with the potential of this new partnership, stating:

“I've been a fan of Gozer Goodspeed’s music for a long time. When we first spoke there was an immediate connection, a mutual passion for independent music, and a clear sense that something really exciting could be happening here!

“There’s a certain sense of adventure you have to have to fly into the unknown with a brand new label and I instantly felt like Gozer got that and was energised by it. A prolific songwriter and wordsmith, Gozer has a number of compelling projects coming up which we’re delighted to be involved in, and we can’t wait to share more about them soon...”

For his part, Gozer describes Mike Five as "a magnet and a sponge for all kinds of music, a music geek right to the bones just like me, and (someone) full of excellent, innovative ideas."

He goes on to say of Lights and Lines, "This is something special... a forward-thinking, genre fluid, proudly independent label putting the focus on telling stories and producing actual, physical music with loving care and attention. I'm exceptionally excited about where Lights and Lines and I go from here."" 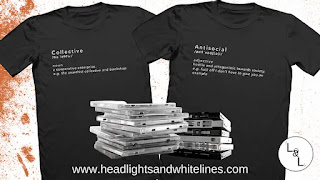 Lights and Lines is also currently running a crowdfunding campaign as part of its launch in order to raise awareness and attract music lovers to the new imprint. The campaign includes some generous subscription options, and features the first in a series of T-shirt designs voted for by Mike Five’s 10k+ Twitter followers.
Up for grabs is not just one but TWO different t-shirt designs, one defining Collective and one for the more Anti-Social among us. Yes, you can order both. There's also a Digital Only annual subscription on offer as well as "The Big One" which promises to include "A very reasonably priced 12 month subscription. If we release a CD, you’ll get one. Cassette Tape, you’ll get it. You get 1 of everything! Plus you get all the digital stuff too! Oh and we’ll throw a tee in!" With two CD EPs, two CD albums, two cassette albums plus all the digital releases coming up in the next few months [AND a T-shirt - Ed] that's got to be worth any independent music fan looking into.

You can find out more about the label’s vision and the campaign itself - which has reached more than a third of its ambitious goal in the first week - here.