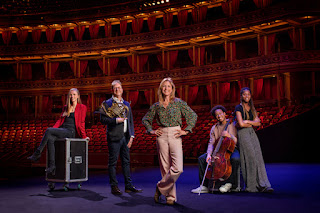 The BBC Proms concerts return from 30th July to 11th September and heralds a summer of live music...
Press Release
With 52 concerts over 44 days featuring 30 orchestras and ensembles, over 100 soloists and conductors and more than 2,000 musicians, this ambitious season celebrates live music-making across the UK.

Audiences are welcomed back in person to enjoy a feast of live music in the Royal Albert Hall. As always, every note of the festival is broadcast on BBC Radio 3 and BBC Sounds, with 20 concerts broadcast on BBC TV and iPlayer for audiences to enjoy at home.
David Pickard, Director of the Proms, said "Planning a Proms season in a pandemic isn’t easy. We have relied on the creativity and collaboration of many people to offer a programme of such ambition, scale and quality, and are proud to celebrate so much outstanding British talent this summer.

"We are looking forward to welcoming live audiences back to the Royal Albert Hall in its 150th anniversary year, and to sharing six weeks of live music with audiences in the Hall and at home on BBC Radio 3 and on BBC TV. I hope you will join us for a summer filled with music."

The BBC Orchestras and Choirs remain the beating heart of the Proms, joined by a wealth of world-class British orchestras and ensembles from across the UK this summer. Some of the best-loved British artists as well as emerging stars appear, including Nicola Benedetti, Karen Cargill, Lucy Crowe, Sir Mark Elder, Benjamin Grosvenor, Steven Isserlis, Sally Matthews, Sir Simon Rattle, Christine Rice, Roderick Williams and Sir John Eliot Gardiner in his 60th Proms appearance.

Marking the 150th anniversary of the Royal Albert Hall and 80 years since the venue became home to the BBC Proms, there is a celebration of the Hall’s magnificent organ across five concerts, as well as four new works commissioned by the BBC. Augusta Read Thomas, Britta Byström, Grace-Evangeline Mason and Gity Razaz, whose new work opens the Last Night Of The Proms, have taken the Hall’s original name, The Royal Albert Hall Of Arts And Sciences, as inspiration.

The First Night Of The Proms opens with Vaughan Williams’s Serenade To Music, a love song to music and musicians, premiered at the Royal Albert Hall under the baton of Proms founder-conductor Henry Wood in 1938, led by a quartet of British singers - Elizabeth Llewellyn, Jess Dandy, Allan Clayton and Michael Mofidian - with the BBC Symphony Orchestra and Principal Guest Conductor Dalia Stasevska. The same forces give the world premiere of When Soft Voices Die, a companion piece to the Serenade To Music by Sir James MacMillan, setting texts by Shelley.

This is co-commissioned by the BBC and Help Musicians in the latter’s centenary year to celebrate music and those who bring it to life. The programme also includes Poulenc’s Organ Concerto with leading organist Daniel Hyde.

Whilst showcasing UK artists, the Proms remains an international festival and is proud to present some of the great international soloists and conductors alongside rising stars from across the globe. The Mahler Chamber Orchestra, the only international orchestra at the festival this year, brings the world premiere of a BBC commission by George Benjamin, belatedly celebrating his 60th birthday last year.

For the first time ever, the Proms will have four unprogrammed mystery Proms to be revealed at a later date, allowing the festival to respond to the changing times.

The award-winning Sinfonia of London makes its much-anticipated concert debut under Proms favourite John Wilson, who re-established the orchestra in 2018. A host of British opera singers - Natalya Romaniw, Sally Matthews, Nardus Williams, Christine Rice, Nicky Spence and Freddie De Tommaso - join forces for an evening of opera exploring themes of isolation and reunion which are particularly relevant at this time.

The Proms presents a rich repertoire of music spanning more than 500 years. Concerts include Bach’s St Matthew Passion with Jonathan Cohen directing Arcangelo and Arcangelo Chorus; Glyndebourne Festival Opera’s performance of Wagner’s Tristan and Isolde conducted by Robin Ticciati, marking 60 years of Proms performances by the opera company; The Golden Age Of Broadway with the BBC Concert Orchestra and Richard Balcombe; Chineke! Orchestra returning for its fourth visit to the Proms, celebrating diversity in composers as well as performers under the baton of Kalena Bovell; genre-defying singer-songwriter Moses Sumney with the BBC Symphony Orchestra and Creative Artist in Association Jules Buckley and award-winning jazz saxophonist and composer, Nubya Garcia.

To mark 50 years since the death of Stravinsky, the Aurora Orchestra tackles its most ambitious challenge yet, performing the 1945 suite from The Firebird from memory, whilst Sir Simon Rattle leads the London Symphony Orchestra in an all-Stravinsky programme.

Building on musical magpie Stravinsky’s reputation for drawing on the music of the past, a focus on composers who have copied, borrowed and quoted from each other runs throughout the festival. From Josquin des Prez and Lusitano to Respighi, Nico Muhly and Shiva Feshareki, the Proms presents a range of works spanning five centuries that look to the past for their inspiration.

Camille Saint-Saëns, who died 100 years ago, is celebrated in a special family Prom. The seven talented Kanneh-Mason siblings and musical friends are joined by former Children’s Laureate Michael Morpurgo for The Carnival Of The Animals, which gets a fresh update in witty new poems by Morpurgo and a new companion piece by Daniel Kidane. A digital project for families, working with partners across the UK, will accompany the Prom.

Henry Wood’s vision to present the greatest classical music to the widest possible audience is honoured through accessible ticket-pricing, with seated tickets from £7.50, half-price tickets for under-18s and Promming day tickets at £6 (plus booking fees - please check the website closer to the season for confirmation of whether Prommers will be able to stand), alongside the extraordinary broadcast offer across the BBC, bringing a summer filled with live music to everyone.