Turn That Noise Down - Tigertailz 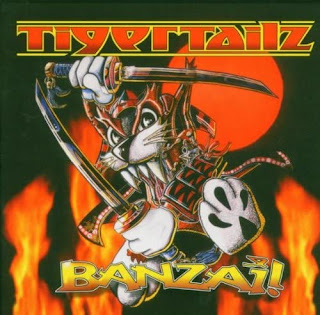 So many well-known albums turn 30 this year and Steve Taylor-Bryant and Susan Omand travel back to 1991 to revisit some of the sounds of their youth that made parents shout "Turn that noise down!" This week, with lots of exclamation marks and cool Zs, Steve remembers Tigertailz and BANZAI!...
Tigertailz, who for the uninitiated amongst you are the Welsh Faster Pussycat [he genuinely means that as a compliment -Ed], are surprisingly still going. I vaguely remember Young & Crazy from 1987, and I bought 1990’s Bezerk because, ya know, there was a girl yadda yadda, but to be fair to Tigertailz they weren’t bad. I took aforementioned girl to see them live and had a good time, not with the girl she went off with someone wearing more leather than me, but they were okay. A bit Poison, bit Faster Pussycat, sometimes generic hairspray pop rock but occasionally stand out so, after my heart was broken, I thought I was done with the band. My tastes were widening, 1991 was bringing grunge and heavier rock to my attention but there was one last Tigertailz release that caught my eye before I moved on, mainly because I’m a sucker for B-sides and that was Banzai!

Banzai! was a great listen then and thirty years later I still had a lot of fun. Murderess starts with its very 80’s horror film soundtrack effects before launching into its more run of the mill rock but the ridiculousness of those shouted backing vocals was entertaining. Livin’ Without You was part Bon Jovi acoustic part piano niceness merged into something a lot heavier and I’d forgotten that rock bands used to mix all these different styles together in one track. Yep, still enjoying my morning. Million Dollar Smile I loved live and loved here. Very heavy blues cover band sounding, some great drum work. She’z Too Hot (live) shows that the band were a decent live outfit and next up was a twist with the bands cover of Metallica’s Creeping Death. It’s brilliant but really not what you expect from a hairspray glam makeup band. Very impressed!

Nine Livez, coming after a Metallica cover, doesn’t quite work but I think that’s it’s placing on the record rather than the songs fault but on one listen it’s one of weaker tracks. Then comes another curveball with a Megadeath cover, Peace Sellz, probably the best track on Banzai! For a Few Dollarz More brings us steel acoustic and very Poison sounding intros after which a hard decent rock track breaks out. Taking the Pain is the last official track on Banzai! but my copy ends with Love Can Kill, a slightly heavier less hairspray tune which I’m told is the direction the band took later in their career which is good to hear.

All in all this was an enjoyable experience, I was expecting to cringe quite a lot at my past musical choices but I’m standing by opinion that Tigertailz were a good, solid rock band and Banzai! is an enjoyable album.