Turn That Noise Down - Simple Minds 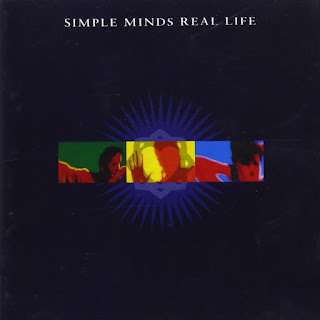 So many well-known albums turn 30 this year and Steve Taylor-Bryant and Susan Omand travel back to 1991 to revisit some of the sounds of their youth that made parents shout "Turn that noise down!" This week, Susan faces up to Real Life...

“My name is Susan. Yes, I am Scottish and, no, I don’t actually like Simple Minds all that much.”

I’m sorry, it’s true, not EVERY person in Scotland is a die-hard Simple Minds fan [if you are, you may want to wander off and do something else now – Ed]. I don’t deny that they had flashes of brilliance, Don’t You Forget About Me being a case in point, but, for the most part, their brand of over-hyped Stadium Pop Rock is really not for me. Very samey, uber mainstream and done better by other bands, like INXS and U2, around at the time. So why listen to Real Life again? Purely because the album is now thirty years old and I wanted to see if my tastes and my opinions of the band have changed in that time.

The album opens with the title track, which has a promising intro that smacks of Dire Straits atmospherics but a synthy swoop brings it back down into 90s “acceptable” rock. It’s a big sound, yes, but is not stand out. It’s safe, generic and predictable. There is a nice bell sound in the next song, See the Lights, and an earworm of a chorus. The guitar is, to be fair, quite good too but the percussion is annoying and the synth is … very synthy again.

Let There Be Love goes overboard on the electronic keys, multilayering and breathy but unintelligible vocals, while Woman is very INXS in its stripped back style, even down to that bend in the vocal [you’ll know the sound when you hear it – Ed] that Michael Hutchence was so good at. Stand By Love goes cliché Celtic with jangly guitars and penny whistles in the intro but then becomes a Suicide Blonde clone, even down to the thumpy percussion. That thumpy percussion continues through the irritatingly repetitive Let the Children Speak, a song which I’m not sure is entirely improved by the wailing woman and weirdly ambient synth bit in the middle.

African Skies has a slightly different tempo thumpy percussion and, yes, the piano stabs are quite interesting. Probably the most “different” sounding song on the album, as long as you can put up with the lalala style choir and that is to be applauded. Ghostrider is not as exciting as it should be, although it would likely be better to dance to than to sit and listen to. The short, atmospheric intro to Banging on the Door is miles better than the rest of the song, which sounds like a Bruce Hornsby cover even though it isn’t. Travelling Man is probably the closest thing to the glory days of Don’t You Forget About Me that’s on this album, right down to a similar guitar sound, and is probably my favourite track on the album because of that.

The album rounds out with the strangely tinkly When Two Worlds Collide but I had forgotten that, just before it, there is a song that REALLY annoys me [What, you mean more than the “somewhat annoyed” that you seem to be now? – Ed]. Rivers of Ice is the big ballad number and, unless you were brought up in the North of Scotland, is probably a nice melancholy slushfest. However, for me, it uses a very recognisable accordion tune, Dr. Mackay's Farewell to Creagorry, and puts different words to it that aren’t the song Dark Island, which we all got drummed into us at primary school singing lessons. Spoils both songs quite impressively.

So yeah, no. If anything, I’m more disappointed in the Simple Minds hype thirty years on than ever I was back in the day. They copied a sound rather than led the way. They’re not really distinguishable from any of the other early 90s pop rock bands around at the time. They never quite reached the global heights of those mega-Stadium bands like post-Joshua-Tree U2 (who I have admittedly seen live in concert several times) or INXS but were very much in that mould. If you are a fan of those bands, and are not averse to a rip-off sound, you may well enjoy the album Real Life but, like the real real life, it’s just not for me.
Image - Amazon
Email ThisBlogThis!Share to TwitterShare to Facebook