Turn That Noise Down - The Orb 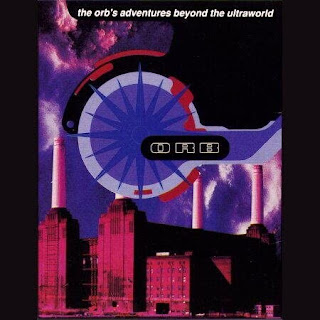 So many well-known albums turn 30 this year and Steve Taylor-Bryant and Susan Omand travel back to 1991 to revisit some of the sounds of their youth that made parents shout "Turn that noise down!" This week, Susan has Adventures Beyond the Ultraworld...

I liked The Orb before ever I knew of the connection with the KLF and the genius of Jimmy Cauty. The double album Adventures Beyond the Ultraworld was my introduction to their work (although, ironically, Cauty had left by then and this album was mostly the work of Alex Paterson) and the single from it, Little Fluffy Clouds, was my gateway aural drug of choice.

And drug it is… or was… or would be. I had never heard anything like it before; this was ambient sampling at its finest. From the cock crow at the start of Little Fluffy Clouds, the aeroplane noises and Rickie Lee Jones explaining about the skies when she was young, the opening track is a psychedelic melange of sound that took my breath away. This seamlessly warps into Earth (Gaia) with a marvellous Ming the Merciless quote from the 1980 Flash Gordon film with bird calls, an ominous low drone, beeps, bloops and whistles, leading into a biblical quote (Amos 9 14 if you’re interested). All the time, there’s drumpads and synth sounds and a plane somewhere in the background. It’s all a bit surreal; it doesn’t really build or go anywhere, it just “is” and is utterly fascinating for almost 10 minutes of track time. The distorted thunderclouds (with added Flash Gordon spaceship noises) at the end of the song lead into a rocket countdown, sampled from the Apollo missions and we get Supernova at the End of the Universe. The echoing voices, insistent drums and snatched glissandi sparkle under a synth soundscape for almost 12 minutes [no this isn’t an album you put on random shuffle on a playlist – Ed] and it gets under your skin as the sounds move round your head thanks to incredible stereo effects which is definitely best appreciated through good headphones. But this isn’t the longest of the tracks, oh no. The 14-minute Back Side of the Moon and 15 minute Spanish Castles in Space come next and take up the whole of side 2 of the double album. The stunning start of Back Side sounds very like KLFs Justified and Ancient but it isn’t one of the credited samples, most of which are, again, moon landing related. Well, apart from the Sex Pistols bit just to keep you on your toes. Spanish Castles is a complete change of pace, going from Apollo to Spartacus, via a Russian commentary about fish, in a highly disturbing way. The bendy guitar in this (I know what I mean), coupled with the arpeggiating piano and very jazz-like walking double bass is absolutely stunning and make the birds, sheep and train noises near the end make perfect sense. Kind of.

Side three starts with Perpetual Dawn and another robotic countdown, this time coupled with native chanting and dub reggae. As you do. I love the burbly laughter in this one too and the percussion is fascinating. Into the Fourth Dimension is next and we’re back among sparkly space noises, this time sampled with the gorgeous canto of Allegri’s Miserere in a highly disconcerting concerto. Add in some Vivaldi, some Depeche Mode and some random Russian monologue over an industrial drum n bass beat and you have no idea where you are, which, I guess, is the idea of four dimensions. Outlands rounds out Side 3 and we step into a thunderstorm again. The aeroplane is also back, as is Rickie Lee Jones, this time accompanied by a Kraftwerk hook. It’s all very horror B-movie this one and the slightly off the beat percussion just adds to the discombobulation of it. Side four starts with Star 6&789 and a “once upon a time” intro before the annoying fly kicks in. And it is SERIOUSLY annoying but it doesn’t last long before the birds eat it and a Paul Simon-esque guitar kicks in which, when added to a bassline that reminds me of The Police, and the birds and a ticky snare, transports you to the heat of the African desert – or it does me at any rate. The immense [in stature and time at 18 minutes – Ed] A Huge Ever Growing Pulsating Brain That Rules From the Centre of the Ultraworld [nothing like a snappy title – Ed] finishes off the album in superlative style, with vocal samples as diverse as Minnie Ripperton and Grace Jones adding richness to weirdness as static waves bubble under a repetitive riff that slowly changes and evolves; the drumbeats don’t even kick in until 5 minutes in. Then there’s cockerels, synthy echoes, choral sounds, jets, ocean waves and even church bells, you name it, you’ll find a noise for it in here I bet. And then it… just stops.

And you’re left abandoned - sitting on the floor in stunned silence, wearing headphones, and wondering what the hell just happened.