Turn That Noise Down - Lenny Kravitz 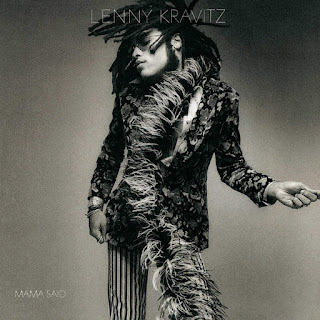 So many well-known albums turn 30 this year and Steve Taylor-Bryant and Susan Omand travel back to 1991 to revisit some of the sounds of their youth that made parents shout "Turn that noise down!" This week, Susan remembers something Mama Said...

Ohhhh, I had forgotten how much I love this album! The second, and probably breakthrough, album for Lenny Kravitz, Mama Said has been in my record collection since it first came out and I think I must have played it til I was scunnered of it back in the day because it’s been many many years [like, maybe, thirty? – Ed] since I last listened to it. It still doesn’t disappoint. It’s just achingly cool and jazzy and bluesy and brilliant.

The album opens with the very chilled Fields of Joy which goes from acoustically sublime to rocking perfection thanks, in no small part, not just to Lenny Kravitz's seriously laid back vocal, nor to the fact it was co-written by composer Michael Kamen (he of the film score to Highlander, Brazil, Memento, Die Hard, License to Kill etc etc etc) with Hal Fredericks, but also Slash’s (yes that Slash’s) glorious guitar-work sparking up the solo. Slash is well in evidence again in the next song, Always on the Run, this time listed as a co-writer with Kravitz as well as giving the much funkier melody his trademark guitar sound. Just listening to that “chug” bassline sound and the glorious brass break too takes me right back – it was the first of seven singles to be released from Mama Said, although only a couple really made an impact on this side of the Atlantic, and this was the song that caused me to buy the album in the first place. Stand By My Woman is next and it’s a total change of pace, reminding me so much of Faith No More’s version of Easy if they also had a Hammond organ. It's just so cool (and yes, Kravitz’ voice has that same effect on me) that I can forgive the slightly naff sax solo. Next up, It Ain’t Over Til It’s Over is the other mega hit off the album that you will definitely recognise and it really does stand up to the test of time, even if it is one of the most commercially 90s sounding tracks on the album. Conversely, More Than Anything In This World has an old-fashioned almost gospel sound, with strings and organ backing a soul-searching ballad. From the reverence of gospel to the heat of a bossa nova beat with What Goes Around Comes Around that devolves into a spectacular modern jazz brass solo in the mid-section. The bluesy hook at the start of the starkly stripped back The Difference is Why always gets me and that wandering bass guitar-line coupled with a simple snare is just gorgeous.

The halfway point in the album is marked by Stop Draggin Around, a “proper” rock track that is recognisably Kravitz, and the beautiful ballad Flowers for Zoe. Then comes a heavily psychedelic version of the opener, Fields of Joy, which gives a much darker, twisted got feel to the song – it’s amazing how the same song can sound so different but still be really, really good. The mood alters again with All I Ever Wanted which sounds very late-Beatles-esque, so no surprise really to find that a Lennon was involved in it, with Sean Lennon credited as both co-writer and piano player. When the Morning Turns to Night is a real end-of-the-night pub anthem that brings to mind drunken singing and lighters waving, back when lighters were still a thing. The last full song on the album is the thinly veiled protest song What the F*ck is Going On and sees a foray into highly experimental samples, echo-reverb and general distortion which gives meaning to its title but is still musically intriguing. A final little minute of acoustic loveliness in Butterfly rounds out an album that is wide-ranging, captivating and happy-making in equal measure.

So yeah it may well be thirty years old but Mama Said is going right back into my regular listening pile, I’ve fallen in love with Kravitz’ voice all over again and I don’t know why I stopped listening to it back in the day.