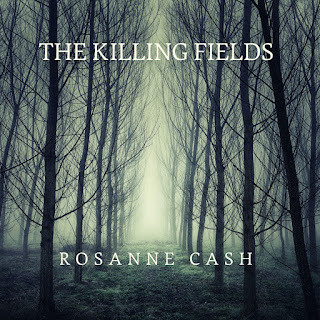 Four-time GRAMMY-winning singer-songwriter Rosanne Cash has released The Killing Fields, a powerful new song that reckons with a dark legacy...
Press Release
A limited-edition 7” vinyl release out on the 9th of April will pair The Killing Fields, which looks at the horrifying legacy of  lynchings in the South US, with Crawl Into The Promised Land, an ode to the resilience of the human spirit that Cash released this past Fall in the frenetic lead-up to the 2020 U.S. election.
Proceeds from the 7” will be donated to the Arkansas Peace & Justice Memorial Movement, an educational online memorial to commemorate the victims of lynchings in the State of Arkansas in collaboration with the Equal Justice Initiative and Coming To The Table. Signed copies of the 7” vinyl are available exclusively at the Rosanne Cash Store.
“A few years of my own personal reckoning with painful issues of race, racism, privilege, reconciliation, and individual responsibility led up to the moment in the summer of 2020, when finally no one could avert their eyes from the truth of white privilege in America, and the damage and sorrow caused by systemic racism. I wrote 'The Killing Fields’ in that summer,” explains Cash. “All that came before us is not who we are now.”
Here are the lyrics:

You crossed on Brooklyn Ferry
not a boy, but not a man
left behind the Navy Yard
and your father’s mislaid plans
I was at the other ocean
and I could not get away
from the flurry of emergencies
every single day

The low ebb of the rocky soil
the high tide of the trees
the dust of men and thunderstorms
the parched and rolling sea
he’s running through the killing fields
just like a hunted deer
impartial moon, uncaring stars
he falls where no one hears

The ripple of the life unlived
the ghosts of mice and men
the empty space of one man’s heart
and what he might have been
but Saint Margaret, she looks over us
Saint Margaret and her kin
at the far edge of the killing fields
she stands there now and then