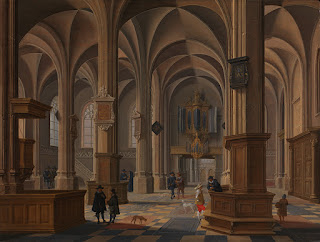 What’s the painting called, who is the artist and when was it painted?
Interior of St Cunerakerk, Rhenen, painted by Bartholomeus van Bassen in 1638


What does The National Gallery say about it?
The church we are looking into here – the Cunerakerk – still towers above the small town of Rhenen in the Netherlands. Bartholomeus van Bassen was an expert in painting church interiors such as these, often adding inventive details, though he employed other artists to paint the figures.

The Cunerakerk was well known to medieval pilgrims as it held relics of the obscure but revered Saint Cunera. In the seventeenth century the church became the court chapel of the exiled Elector Palatine and King of Bohemia, Frederick V, and his wife Elizabeth Stuart. Van Bassen, also a skilled architect, was asked to transform the adjoining convent of the Cunerakerk into a grand winter palace for the exiled royals.
A larger/clearer look at the painting [details brightened using Photoshop] 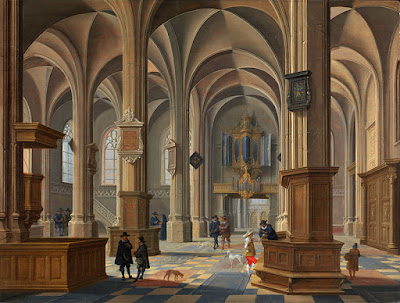 What’s interesting about the painting?
The thing that stands out, as explained above, is that there are definitely two different hands at work in this painting. The figures are a lot sketchier than the architecture, there's a tonal shift in the colours used and they don't have the same precision of detail. This, however, may just have been because, as an architect, Van Bassen was more interested in the building than the people. Indeed, when you think about it, the random scattering of bystanders does echo what happens in modern "concept art" presentations of proposed buildings in planning applications, with people being drawn wandering through the paths and corridors of new installations, utilising the space and giving it scale and perspective.

That vaulted ceiling! I mean, just look at it. The clarity of line and definition of light and shadow in those repeating curves is just gorgeous and could just as easily be from a 1930s painting as one from 300 years earlier.

Back to the people. Although I understand why they're there (and the dogs are a neat touch) they feel a bit "fuzzy felt," [showing your age there - Ed] by which I mean they stand out as being stuck on the background after the event. I also feel the inclusion of softer corporeal forms diminishes the echoing grandeur of the space in the building - I hear chatter and footsteps as I look at the painting when the building deserves awe inspired silence.
Would I have it on my wall?

For the gorgeousness of that ceiling, yes I would.