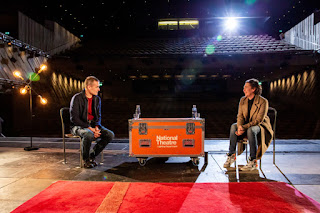 This week, The National Theatre starts a new online interview series, Life in Stages, profiling some of the biggest names in British theatre. Watch the trailer...
Press Release
The series, which will be free to watch, will launch on the National Theatre’s YouTube channel this Thursday 22nd April at 7pm BST with each new episode added at the same time every Thursday.

The second episode on Thursday 29th April will feature co-stars of the NT’s critically acclaimed film Romeo & Juliet - filmed in the Lyttelton theatre over 17 days during lockdown - Josh O’Connor and Jessie Buckley. On Thursday 6th May the third episode of the series will see a discussion between actor and director Adrian Lester and writer, comedian and actor Meera Syal. Details of further episodes from this series will be announced later this month.

Filmed on the empty Lyttelton stage, each pre-recorded episode sees the artists reflect on their theatre careers, and reveal the funny, personal and poignant stories behind everything from their earliest theatre memory to their biggest professional highs and lows.

Rufus Norris, director of the National Theatre, said “We are thrilled that as we look ahead to our reopening in June, we are able to launch Life in Stages. The interview series has been a fantastic way to take a moment and reflect; to explore the careers of some of the leading figures within our industry, and to consider how the world around us will shape the work we create as we move forwards. We are so grateful for the time generously given by the artists involved and to Charles Stanley for their support.”

The series is supported by Charles Stanley Wealth Management. Speaking about Life in Stages Paul Abberley, Chief Executive at Charles Stanley said: “At Charles Stanley we understand the significance of conversation. We spend time getting to know our clients at every stage of life's journey to help them achieve their personal and financial goals. Much like Life in Stages, we discuss everything from careers to retirement, lifestyle to responsibilities, family and the wider community. After a tumultuous year for the arts, we are delighted to partner with the National Theatre to celebrate the art of conversation and to have had so many wonderful British Artists join this fantastic and timely series.”

Find out more and sign up for reminders about the first episode here.