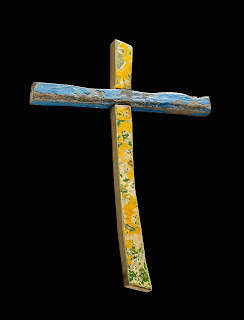 A British Museum Spotlight Loan, Crossings: community and refuge will tour the Lampedusa cross around England for the first time, starting in May...
Press Release
Made from the remnants of a boat carrying refugees wrecked near the Italian island of Lampedusa, close to the coast of Tunisia, the cross carries poignant messages about kindness, community and the indifference faced by many refugees.

Alongside the cross (pictured above) will be a display of twelve tiny boats from Syrian-born Issam Kourbajʼs series Dark Water, Burning World, made from repurposed bicycle mudguards tightly packed with burnt matches to represent the fragile vessels used by refugees to make their perilous voyages across the Mediterranean. Seeking to evoke the plight of Syrians, these were made by Kourbaj as a response to the ongoing tragedy in Syria. The boats have recently been nominated as the 101st Object in the British Museum and BBC Radio 4’s ‘A History of the World in 100 Objects’. A 10th anniversary programme was recently broadcast to reflect on the major issues which have affected the world in the past decade. Inspired by Syrian antiquities depicting sea vessels that date from the 5th century BC, the boats convey the fear and exhaustion of the crossing, and the trepidatious uncertainty of survival. In utilising cheap and discarded materials that might otherwise go to waste as the basis for the artwork, Kourbaj represents the need for refugees to use what they can freely acquire following separation from their homeland, while urging the global community to find value in everything and everyone, no matter how humble their origins. 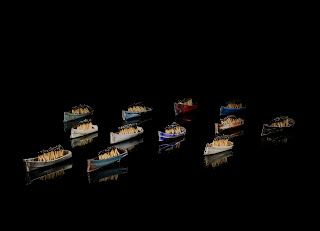 In October 2013, an overcrowded boat carrying 466 migrants from Somalia and Eritrea caught fire, capsized and sank near Lampedusa’s coast. At that time, there was no official maritime rescue service. 311 lives, fleeing persecution and seeking refuge in Europe, were lost. Moved by the plight of survivors whom he met in his church, the island’s carpenter, Francesco Tuccio, made an individual cross for each person. Acting as a mark of the 155 survivors’ salvation from the sea and their hope for the future, the cross also reflects the fate of many migrants. Tuccio also made larger crosses that he gifted as a plea for discussion about community and responsibility – it is in this context that the British Museum acquired this cross in 2015, simply made from two pieces of brightly painted wood fitted together.

The Lampedusa disaster was one of the first examples of the European migrant crisis and the terrible tragedies that have befallen refugees and migrants as they seek to cross from unstable regions in Africa and the Middle East into Europe. It led to operation Mare nostrum – our sea – in 2013, by which the Italian navy rescued 150,000 people from the straits of Sicily. The islanders of Lampedusa did not wait for official authority or funding to rescue those in peril on the sea. They shared resources to rescue, feed, clothe, comfort survivors and bury those washed up on the shore. Their kindness altered their formally idyllic life and challenged them with difficult and unwelcome changes. In this way, the cross invites discussion about the stresses of learning to live cooperatively. It marks an extraordinary moment in European history and stands witness to the kindness of the people of Lampedusa and as a reference to the ongoing migrant plight today.

Engaging audiences in questions of identity, belonging and sharing our world, the display will also be accompanied by powerful and engaging programming that ties to these themes at each venue. Partner venues will encourage the sharing of stories amongst local communities, including those with migrant experiences of their own. Other activities will include creative workshops with art pieces responding to the cross, talks with refugee artists and time spent by the public with the collections to offer new perspectives and objects on what represents their locality.

The tour will touch on the ethical and practical challenges presented by mass movements of people, and on how Europe has recently responded to refugees and migrants. The Lampedusa cross will start its journey at Coventry Cathedral in May as part of the City of Culture celebrations. Coventry has welcomed the most Syrian refugees per capita in the UK and is also a City of Sanctuary. The Spotlight Loan will tour to venues in Manchester, Hastings, Derby, Ipswich, Bristol and Rochester from May 2021 until November 2022 as part of the British Museum’s National Programmes, bringing objects from the Museum to audiences around the UK for free.
For more information on the cross, see this Objects of Crisis episode where Director of the British Museum Hartwig Fischer chats with playwright and trustee of the Museum Pat Cumper about the Lampedusa cross and the act of compassion in the midst of crisis that brought it into being:

Director of the British Museum Hartwig Fischer said, “The wood of the cross is a reminder of the passage, not only of these vulnerable refugees who staked everything on the boats being able to safely transport them, but of the human beings throughout history who have sought refuge on similar perilous journeys. I hope visitors around the UK will connect with the poignancy of the cross and be able to reflect upon the ongoing disruption, upheaval and hope that it symbolises.”

Curator Jill Cook added, “The Lampedusa Cross reminds us of all the histories that are lost and of the thousands of people who are not otherwise remembered. The wood with its paint blistered by the sun and smelling of salt, sea, and suffering embodies a crisis of our times, as well as hope. The cross invites discussion of the varied reactions to one of the great tragedies of our time. It is an artefact shaped by tragedy that symbolizes those who have nothing and desperately seek to share in a better future. As such, it is touchingly complemented by Issam Koubraj’s little boats.”
Artist Issam Kourbaj (b. 1963) comes from a background of fine art, architecture and theatre design. He was born in Suweida, Syria, and trained at the Institute of Fine Arts in Damascus, the Repin Institute of Fine Arts and Architecture in Leningrad (St Petersburg) and at Wimbledon School of Art (London). Since 1990, he has lived and worked in Cambridge, where he has been artist-in-residence, a Bye-Fellow (2007–2011) and a Lector in Art, at Christʼs College. His work has been widely exhibited and collected–most recently by the recent addition to the Pergamon Museum, Berlin. Since 2011, Kourbaj has been dedicated to raising awareness and money for projects and aid in Syria through several exhibitions, installations and performances in the UK and abroad.

Kourbaj talked about creating the artwork. saying, “Lead was the first material I experimented with when making my boats. I used it for its density, as a response to the many tragedies of sinking boats in the Mediterranean, but also the ancient miniature model ship carrying three goddesses that inspired this piece was made from lead too. Soon after I was drawn to bicycle mudguards, which are designed to protect from the mud, yet sadly many Syrians and many others were not guarded by the flimsy boats, lead-like, that they were so desperate to take to escape the destruction. Spent matches speak about the people of the boats, with burnt parts to reflect the trauma that those women, children and men carry with them, while water-like resin holds these burnt matches together, just as we all bond, hold and support each other in desperate times.”
A British Museum Spotlight Loan Crossings: community and refuge will head to:

Supported by the Dorset Foundation in memory of Harry M Weinrebe.