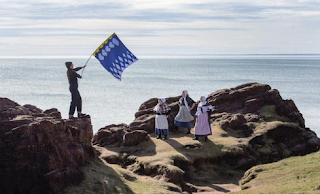 The programme for the rescheduled Arbroath Festival has been revealed as Scotland’s historic coastal town looks to the future using culture to connect communities...
Press Release

Co-created and inspired by residents, local partners, and grassroots organisations, the 2021 programme will run from 2 July to 12 September and includes major artistic events, premieres and commissions across heritage, music, literature, and visual arts. Marking 701 years of the Declaration of Arbroath an inspirational moment for Scottish history and the story of the town the festival programme features over 30 events and installations and has been developed to connect people locally and nationally with heritage, arts, learning, and community at its core. Following Scottish Government guidelines, events, installations and performances have been programmed to adapt to the restrictions whilst putting culture in the heart of the community.

Commissioned by Hospitalfield and Arbroath 2020+1, Over Lunan is an extraordinary sound and visual promenade performance in the dunes of Lunan Bay in Angus, Scotland. Created by Angus Farquhar of Aproxima Arts with script by Purni Morell, this major live commission blends a monumental sound and light installation with elements of theatre as audience members are immersed in an environmental art piece that draws on the fragility of the natural world and ancient mythologies. This special open-air production running from 2 - 12 September is designed to be enjoyed in a relaxed, socially distant environment. For those unable to travel to Angus, the team is also working on a radio play, produced by award-winning programme maker Steve Urquhart.

Dundee Print Collective have been commissioned to design a series of festival flags to mark the anniversary of the Declaration of Arbroath which will be installed and displayed on Arbroath High St transforming the town into a riot of colour. The designs were inspired by working with the local community and schools in the area. The resultant striking and contemporary artworks represent the culture, geography and history of Arbroath, referencing Medieval design, primary colours and graphic shapes whilst incorporating contemporary imagery. Festival Flags will take over Arbroath High St from 2 - 31 July.

To be housed in the Visitor Centre at Arbroath Abbey, The Arbroath Tapestry is created by Angus embroidery and textile artists to commemorate the 700th anniversary of the Declaration of Arbroath and the history and heritage of Arbroath and its famous abbey. An intricate embroidered three-panel tapestry has been created to give greater prominence to the Declaration and placed the history of Arbroath and its Abbey at the forefront. The Arbroath Tapestry has been designed by Scottish artist Andrew Crummy, designer of the Great Tapestry of Scotland. In addition, Historic Environment Scotland, who manage the abbey, are producing a new exhibition exploring the history of the Abbey from its founding in 1178 to the present day. It’s centrepiece is a major display on the Declaration of Arbroath, incorporating a faithful facsimile of the original document, and a light-hearted animated film to help visitors understand the Declaration. Summer opening dates to be confirmed subject to Scottish Government guidelines. 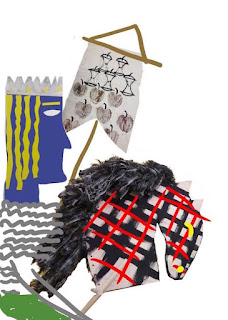 2020+1 artist Mandy McIntosh has reimagined and reformatted a people’s procession into an extraordinary multi location public artwork. Arbroath will host these works and micro events during July. Pageant for Gallivants is a dispersed, atomised public artwork weaving playful and engaging visual narratives directly into the shop windows and fabric of the town. The audience become the player processing from point to point safely under their own stream exploring outdoor installations, pop-up micro events and geo-located audio. Pageant for Gallivants turns Arbroath into a mise-en-scene of surprising stories inspired by the Towns history along with enterprising poetic interventions that animate a vision for the future.

Picking up from the multi faceted creative and industrious work that had been achieved on the lead up to 2020 celebrations McIntosh reconnected with grassroots community groups and local creative to imagine a revamped project. Pageant for Gallivants invites many voices to share and celebrate the town as a shared public space.

The New Scriptorium is an artist designed and built structure that will be sited on the Abbey grounds for one year. This compact structure is a commission that is directly inspired by the history and context of the site. It explores and responds to the social, political and cultural histories of the Abbey and its influence on Scottish History. Bobby Niven has designed the building considering the history and skills in this medieval period along with the design and decoration of that time. The building will be constructed off site and have a green oak frame created by Angus based carpenters. The space planned to open in September will be used as a learning and engagement space and as a writers studio hosting a programme of writers in residence for Arbroath Town.

For Arbroath 2020+1, poet Lesley Harrison has devised a collaborative performance with viola-player Katherine Wren, and clarinettist Alex South, on the theme of the voyage of the 19th century whalers to the polar seas, and the cultural aftermath of the whaling industry. Performed at Arbroath Harbour in the Fish Market, Katherine and Alex have composed new pieces around poems from Lesley’s most recent collection, Disappearance. At one level, whale song provides a bridge between the human and the non-human; responding to its melodic patterns and its expressiveness gives us a way to imagine ourselves into worlds beyond our own temperate zone. This opens up the idea of music and sound as they create and structure our own landscape – from the rhythms and vowels of local language to bird song, fragmented archive ‘voices’ and even the hum of pylons. It also invites us to explore the legacy of musical response to the north, from the heritage of songs and fiddle tunes as they are carried by the whalers, to contemporary compositions which reinterpret and relocate this material.

Opening in early July, The Making of a Pageant is a community heritage exhibition taking place in the Arbroath Art Gallery. The exhibition showcases what goes into the making of the historical pageant and the community effort involved in creating the events. Featuring historic collections, photographs, footage and a collection of newly recorded aural histories the exhibition celebrates the creativity and innovation of the events; from the theatrical performances to the newly composed music, the amazing floats and astonishing staging. 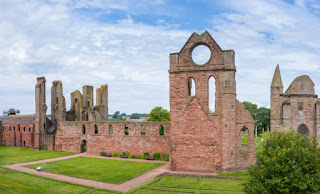 The events above are just a taster of a festival programme that will feature a range of historic and cultural trails throughout the town from the Arbroath Murals project featuring the work of five artists based in the town, to the Arbroath Women’s Heritage Trail, historic audio trails and the Arbroath Town Pageant Trail featuring contributors Auchmithie Heritage Arts Residents with outdoor performance, storytelling, song and dance.
Throughout the festival a series of exhibitions and events will also take place at Hospitalfield, the historic arts school and cultural centre currently undergoing an £11million revamp including a new sustainable garden by horticulturist and designer Nigel Dunnett and a restoration of the 17th Century fernery. Artist Mick Peter will unveil a new series of outdoor sculptures in the grounds of Hospitalfield, and sculptor Christina Mackie’s work Judges III will be exhibited in Scotland for the first time at Hospitalfield House.

As a community led festival, participation has been a key element of the programme and sees numerous projects re-imagined to encourage local participation as part of distance learning and activities designed to explore the legacy of the Declaration of Arbroath and engage in cultural activities. The New Declarations Project devised and led by writer Rebecca Sharp has invited secondary school students in Angus to join in an online writing activity where each contributor shares three new declarations, intentions or statements that will generate a collective text. The New Declarations will then be presented at the festival.

In addition to the workshops that helped inspire the designs for the 701 Flags Project, hundreds of art packs have been delivered across Arbroath so residents can create their own flags to display in their windows throughout the festival. Wool warriors have also been asked to employ their needles to contribute to Arbroath’s very own giant knitted unicorn Abrinca to be part of the Arbroath Art Trail co-ordinated by lead artist Jilly Henderson and community group, the Woolly Workers. Finally for those whose main activity this past year involved walking their dogs, Arbroath’s First ever outdoor dog pageant will give pooch owners patterns to knit their very own pageant costumes.

In addition, to mark the importance of the 701 anniversary of the Declaration of Arbroath on 6th April 2021 two virtual literary events will take place showcasing new literary works by writers across Angus and Scotland. Scottish PEN present live readings from 'Declarations on Freedom for Writers and Readers'. An anthology of poetry and prose influenced by the Declaration. Declarations on Freedom for Writers and Readers includes many voices, featuring some of Scotland’s leading writers such as Karen Campbell, A C Clarke, Carl MacDougall, James Robertson and Chitra Ramaswamy.

As a result, the diversity of these authors spans from Scotland to southern Africa, from Myanmar to Mexico, from Ireland to India and the writings featured explore a range of issues including freedom of expression, the need for free exchange of ideas and the concept of the Declaration and what it might mean in today’s world. Also taking place on the 6th April, Angus Writers Circle will host a virtual launch event for the book 'Kist of Scots' with 16 selected readings from the newly published anthology of poetry and prose.

Speaking at the launch of the programme Creative Producer Pippa Martin said: “Staying connected, celebrating our communities and reflecting and looking forward feels more important now than ever. Arbroath2020+1 is about celebrating the town and its people through sharing. We are delighted to have been able to adapt the 2020 programme and return this year with a rich mix of community led projects and exhibitions as well alongside exciting new commissions. The health of the town and residents remains our primary consideration in any decisions and activity going forward.”

Angus Council Leader David Fairweather added “Angus Council Leader David Fairweather said: “A huge effort went into capturing the very best of Arbroath in celebration of the 700 years since the Declaration was signed, only for that work to be delayed by a global pandemic. I say delayed because Arbroath has not been denied its opportunity to showcase the very best of its people, culture, heritage arts and learning.

“Instead, residents, local groups and organisations, assisted by others, have soared to meet the challenges set by Covid-19 and will deliver what I am certain will be a superb festival, that maximises the use of all mediums and platforms to ensure that celebrations are not only fit for the occasion, but safe for our times.

“It truly will exemplify the heart and soul of community here in my hometown of Arbroath, more widely in Angus and, wider still, across Scotland.”

Find out more about the Arbroath Festival and celebrations around the 700th anniversary of the Declaration of Arbroath here.
Image - Top - Image credit: Neil Hanna, rest - https://arbroathfestival.com/
Email ThisBlogThis!Share to TwitterShare to Facebook