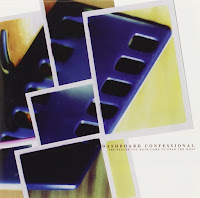 For Educating Omand, Susan Omand has been listening to music that she missed out on first time round. This year, our team of writers suggest albums for her to listen to in Educating Omand: Gap Year. This week, she reaches The Places We Have Come to Fear the Most , suggested by Nate McKenzie...

Yes, I know, I know, it’s been a while. But there is a reason for this. You see, I’m kind of stuck. I’ve listened to this Dashboard Confessional album five or six times now and I just don’t get it. More to the point though, I also don’t get WHY I don’t get it. I’d say I know Nate, who suggested the album and has written about it before, pretty well now. We see eye to eye on most things and have a shared love of all things literary and cultural (pop culture and otherwise) and can hold quite spirited debates on occasion so quite why our music tastes are so radically different is beyond me. Maybe it’s an age thing [after all, you are ancient – Ed] or maybe it’s associated, by Nate, with a “time and place” thing that I am not party to.

It’s not a BAD album, don’t get me wrong, I don’t hate it; I have, after all, listened to it five or six times in the past month or so. It’s just not what I expected from Nate. It’s not what I think his style is at all, it doesn’t reflect the person I know, it’s … boring. And that annoyed me.

The album opens with slightly flat acoustic guitars and angst-ridden whiny singing in The Brilliant Dance. My brain tries to fit this into the Del Amitri shaped gap in my mental music jigsaw puzzle and fails. The next song, Screaming Infidelities, has more angsty vocals and acoustic guitars, this time joined by admittedly quite good, if loud, percussion, and reminded me of a Psychedelic Furs tribute act – this is Pretty in Pink without the innovation. The Best Deception is not deceptive at all, due to being more of the above. This Ruined Puzzle isn’t much of a puzzle either but at least has something more interesting in the string orchestration. Saints and Sailors is more upbeat by being a speeded-up version of the previous song styles, verging more on the pop-punk Green Day thing just done as an MTV Unplugged session. The Good Fight again has good drums, which I felt, again, to be a little too up-front in the production values, as they are throughout the whole album if I’m honest [what’s wrong with that?! – Ed]. Standard Lines is another acoustic/angsty standard, Again I Go Unnoticed went unnoticed [again - Ed] and the title track really is the place that I have come to fear the most, because I really don’t want to upset my friend [are you sure you’re still his friend by now? – Ed] by not raving about one of his favourite albums. The final song, This Bitter Pill, isn’t too hard to swallow though and probably is my favourite track on here and NOT just because it’s the last one. I think it’s because we finally actually get some passion, some connection, from the vocal, some anger in among the anguish.

The saving grace, for me, is that it’s got a short runtime, coming in under half an hour for all ten songs. OK, that’s not fair. Thinking about other plus points, I can say that Dashboard Confessional do have a definite signature sound because most of their songs sound the same from what I’ve heard here. Harking back to my introductory paragraph, maybe it IS an age thing. I’ve heard all of this before, and done better, by bands from 35 years ago, when this kind of thing was new and different. Or maybe it’s because I’m not "connecting with the lyrics in the right way", I dunno. What it does mean is that I can’t count myself as Educated one way or  the other this time, as I just don’t get it.

Help me Nate, what am I missing?