Turn That Noise Down - REM 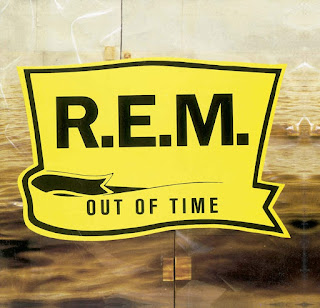 So many well-known albums turn 30 this year and Steve Taylor-Bryant and Susan Omand travel back to 1991 to revisit some of the sounds of their youth that made parents shout "Turn that noise down!" This week, Susan is Out of Time...

I didn’t actually like REM all that much. You see, Out of Time was a friend’s go-to “break up” album of choice back in the day so I heard it pretty regularly but that also means it, and thereby the band, has always had that “desolate wailing into a pillow” association for me. So, when the album pitched up on our 30-year retrospective list, I thought I’d give it another go with the benefit of some distance and without the background sobbing.

There are two songs on the album that you’d recognise from high in the charts in ‘91, Losing My Religion and Shiny Happy People, because they were everywhere and played to death at the time, although there were another couple of singles that scraped into the Top 30 in Near Wild Heaven and Radio Song. The rest of the album goes along similar lines – the dark depressing lyrics being monotonically whined by Stipe over boppy, upbeat music. BUT, and it is a proper “capital letters BUT” for me… it’s not as awful as I remember it.

Radio Song opens the album with a Daydream Believer-esque intro that swiftly turns into a Suicide Blonde style rhythm guitar riff which, with the added rap at the end from KRS-One, makes for an interesting mashup. Losing My Religion, far from being the hackneyed whine I remember, has a lot of musicality behind it; the mandolin riff was unusual at the time and remains so. Near Wild Heaven has shades of World Party’s Is It Like Today about it, so there may have been some cross influence there as the World Party song came out two years later. Also, I was surprised to learn, it’s one of two songs on the album that doesn’t have Stipe on lead vocals, the job being picked up by bassist Mike Mills, so that casts a different light on it for me. The almost-instrumental Endgame looks back rather than forward in time and is very Stairway to Heaven throughout, even down to the riff. Shiny Happy People benefits from the vocals of the B52s singer Kate Pierson and there is much of their aesthetic in the track. As a side note, yes, I still did the arm thing [if you know, you know – Ed]. Belong has a lot of funk in the bass and the spoken word lyrics work very well as poetry. Half a World Away has the addition of a harpsichord to commend it and Texarkana lives up to its title by having a very country-rock sound. It’s the other song that has Mills on lead vocals and is the better for it imho. The country theme continues with Country Feedback, a ballad this time, but the muddy, distorted electric guitar lifts it above the dirge it could be. The album rounds out with Me In Honey [no, stop it, that’s the name of the song – Ed] and Kate Pierson is back to duet, leaving me with a smile.

My favourite track on the album though is Low, which is pretty much The Doors updated by 20-odd years. There’s beautifully orchestral strings, there’s psychedelic Hammond organ, there’s a thumping bass and a glorious key change. So, yeah, I guess I have to admit to letting circumstances at the time colour my judgement of Out of Time and has made me realise that, sometimes, it’s worth going back to revisit the rubbish from the past with fresh eyes [or ears - Ed] as it may not be quite so bad as you remember.