Turn That Noise Down - The KLF 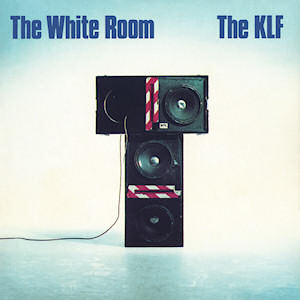 So many well-known albums turn 30 this year and Steve Taylor-Bryant and Susan Omand travel back to 1991 to revisit some of the sounds of their youth that made parents shout "Turn that noise down!" This week, Susan re-enters The White Room...

This album, The White Room, was the gateway drug to The KLF for me. I remember vividly the first time that I heard it, having been introduced to it by a new group of friends, and I fell in love with it from the very first notes – it was like nothing I had ever heard before, or since to be honest, and that was me hooked on anything and everything I could find that involved Messrs Cauty (of whom more later in the year) and Drummond; from The JAMs (The Justified Ancients of Mu-Mu to give them their illuminatus-inspired full title), through the Timelords, to their superstardom status as The KLF, culminating in that 1992 Brit Awards ceremony involving thrash metal, machine guns and a dead sheep, one of those “always remember where you were” moments, that announced their immediate departure from the music industry and cemented their deification for me as the absolute gods of artistic anti-establishmentarianism/cynical popculture manipulation that I wholeheartedly admire to this day.

But what of the album itself? It was originally meant the be the soundtrack to a, now pretty much lost to the world, film of the same name and was to be followed up with a much darker twist in The Black Room but the (sheep)shit literally hit the fans and none of that happened. As I said above, this was my gateway to their other work and, as their fourth studio album, it probably is their most commercially accessible at the time, full of easy ambient dub and trance with hefty electronic beats and sampling of everything from Native American chant to off-station radios to accordions. It’s also the album that provided the vast majority of their chart hits, getting a lot of airplay on radio and TV back in the day, from What Time is Love and Last Train to Transcentral to 3AM Eternal and Justified And Ancient, the single of which featured guest vocals by Tammy Wynette and that incredible video in an ice-cream van. If you were around (and sober enough) in the early 90s you knew who the KLF were. But the other tracks on the album are just as incredible. There’s the reggae sounding No More Tears/The White Room, the gospel of The Church of the KLF, the pure pop of Make It Rain and the Twin-Peaks-ness (I know what I mean) of Build a Fire.

There is no way that I can do full justice to the brilliance of this album just by writing about it so I highly recommend that you devote 40-odd minutes and listen to it… if you can find it. Yes, bootlegs are available on YouTube [*cough* here *cough* - Ed] but, unless you have your CD from back in the day like I do, it’s really difficult to find the full original album to listen to. HOWEVER, as of 1st January this year, the full KLF back catalogue is slowly being officially re-released to streaming services so there’s still time.

Talking of Time…
Image - By Source, Fair use, https://en.wikipedia.org/w/index.php?curid=37362722
Email ThisBlogThis!Share to TwitterShare to Facebook