Turn That Noise Down - Genesis 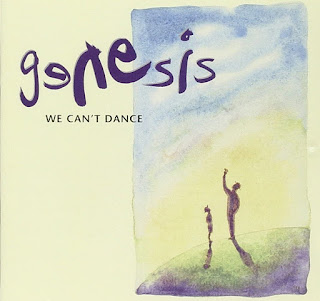 So many well-known albums turn 30 this year and Steve Taylor-Bryant and Susan Omand travel back to 1991 to revisit some of the sounds of their youth that made parents shout "Turn that noise down!" This week, Steve realises We Can't Dance...

I’ve always liked Phil Collins, as a drummer it’s inevitable you’ll gravitate towards him at some point, and as a child in 1980’s Phil’s albums were always on during long car journeys. I’ve always been a bit hit and miss with Genesis though. I like the odd thing from the Gabriel era but not all of it. I like certain tracks after Gabriel, I like some of the more commercial stuff I mean who doesn’t love a Spitting Image music video? It wasn’t until 1991 that I truly enjoyed a Genesis album from beginning to end though and it’s probably because We Can’t Dance ticks all the boxes. It’s part Gabriel era, part Collins solo album, and very commercial. It’s a joy if I’m honest although joy is probably not the right word for an album that starts with the glorious No Son of Mine, a time that starts slow and melodic and just keeps building until Collins is screaming at the end and those deep toms are banging away underneath quite a dark subject matter. Jesus He Knows Me is next and it’s a brilliant sounding song that cuts deep into the irony of religion, especially in the US. It’s a Private Eye or National Lampoon article set to a driving beat and is entertaining in both style and lambasting of those who need being told. It’s genius in its writing...

Driving the Last Spike is another that starts low and slow and builds in layers. It’s a beautifully haunting soundtrack to some incredibly sad lyrics about the working conditions building our nations railway a few hundred years ago. It’s a history lesson with a drum beat, it’s a pop song reminder of what’s been lost along the way in our industrial evolution. It’s part modern commercial and part 70’s prog rock and once that chorus starts its epic it’s reach and structure. I Can’t Dance is the most fun you’ll have listening to a song that isn’t on a comedy album. It makes no odds what it’s about it’s just funny.

Never a Time is a great ballad that is probably more 1980’s than the decade it’s released in but it has some great guitar moments and drum licks whilst being everything you want from a ballad. Dreaming When You Sleep a song about your guilt after a hit and run car crash is an unlikely subject matter for a band to cover but it’s honestly up there with Driving the Last Spike as possibly joint best song on the entire album. The darkness of the lyrics gets amplified once the trademark Phil Collins drums start towards the end. It’s sad, it’s a devastating subject, it’s musically interesting, and it’s a stunning listen.

Tell Me Why I genuinely thought was a Phil Collins solo record so that gives you some idea of how it sounds. It’s the most “solo” track on the album which to some would be an issue but to me is a huge selling point. Living Forever is the medical sales version of Jesus He Knows Me. It’s about all the conflict in the medical advice the populace gets and whilst not as satirically satisfying as Jesus it’s still important and executed well. Hold on My Heart is just stunningness (it’s a word!) through the war holes. It’s Phil at his raw best vocally with some beautiful instrumentation. It’s up there with Against All Odds or Separate Lives in the Phil list of ballads. Way of the World is the ‘Genesis notices the world is fucked’ song. It’s an incredibly catchy way to shine the light on environmental and social issues but it also contains some brilliant visual lyrics like “Mother Nature sits on the other side with a loaded gun” that really hit home. Since I Lost You is the song that sounds lost unlike Genesis and if you had someone other than Phil singing it could be anyone’s song. Don’t get me wrong, it’s not bad at all just a little more generic than expected after such deep and interesting tunes beforehand. Fading Lights closes out the album with a song about memory and nostalgia, looking back and wondering. It’s the most Gabriel era sounding track on We Can’t Dance which makes me think it’s maybe about the original bands demise but it’s just a lovely little song with a great instrumental in the middle.

We Can’t Dance is the most insightful, sarcastic, deep album I ever remember Genesis doing but it’s also the only one I ever return to to listen to in its entirety and I won’t apologise for.