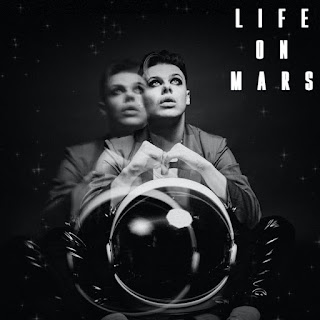 Yungblud has released the official recording of his take on the 1971 hit song Life on Mars by David Bowie...

Life on Mars? (Live at A Bowie Celebration 2021) was performed at the star-studded A Bowie Celebration: Just For One Day event in January and was also the song which soundtracked the successful landing of the Perseverance Mars Rover in February.

“today I did a merch drop with NASA and was allowed to release a cover of my favourite song by my favourite artist,” Yungblud shared on Twitter [along with some (understandable) swearing - Ed]

today i did a merch drop with @NASA and was allowed to release a cover of my favourite song by my favourite artist. someone fuckin wake me the fuck up !!! @DavidBowieReal
GO GO GO 🖤⚡️🚀⚡️🖤https://t.co/8gS04DCSv4 pic.twitter.com/tuaV3cltnZ

That merch drop was designed specifically to honour the Perseverance Rover and includes the singer’s iconic pink socks embroidered with the NASA logo and the positioning of Mars, as well as Life on Mars hoodies and windbreakers. The collection can be found on Yungblud’s official website.

Telling the story of how the opportunity initially came about, the Doncaster-born singer told BBC’s The One Show: “First of all, I am as ready as a rabbit on Easter. I love space so I am here for it. I remember my 23-year-old manager rings me on the phone. It was late cos he’s in LA and it must have been midnight cos I’d had a couple of beers, so I was already kind of out there. He’s like, ‘Yo, I just got off the phone with NASA.’

“I’m like, ‘Alright, yeah cool, what’s it about? You leaving me to go be an astronaut? ’He said, ‘No you idiot, it’s about you! If the Mars rover lands successfully, they’re gonna play your cover of your favourite artist of all time, David Bowie, alongside it. I’m just like, ‘Nah man’, that just sounds like someone is just completely off their head telling you a mad story.”