News - This Is A Robbery 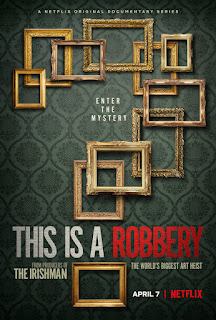 It was the biggest art heist in history. Watch the trailer for the documentary, coming to Netflix on April 7th, that aims to uncover the whereabouts of half a billion dollars worth of stolen art...
Over St. Patrick’s Day weekend in 1990, legendary works by Rembrandt, Vermeer and others, worth over 500 million dollars today, were stolen from the Isabella Stewart Gardner Museum in Boston. Now, it's your turn to enter the mystery as the art is still missing and there's a 10 million dollar reward for whoever finds it.

Investigators reviewing the cold case attempt to recover the missing works, unmask the perpetrators and solve the biggest art heist in history as this four-part documentary series from director Colin Barnicle uncovers the leads, dead ends, lucky breaks and speculations that characterized the investigation of this still unsolved mystery.

Watch This Is A Robbery only on Netflix  https://www.netflix.com/thisisarobbery
Email ThisBlogThis!Share to TwitterShare to Facebook