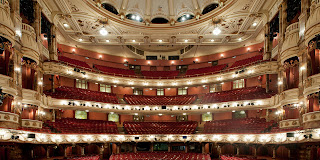 English National Opera and BBC Two have announced that a specially-created concert of Handel’s Messiah will be recorded for exclusive broadcast on BBC Two this Easter...

The hour-long performance of Handel’s much-loved masterpiece will be imaginatively staged at the London Coliseum, and filmed specifically for a television audience. With no live audience present, the performance will be brought to life by the creative teams of the English National Opera, and performed by guest soloists and the ENO Chorus and Orchestra, making imaginative use of the stunning auditorium at the Coliseum. It will be presented by saxophonist and broadcaster YolanDa Brown and broadcaster Petroc Trelawny.

Handel’s Messiah follows the success of ENO’s recent partnership with the BBC to bring audiences at home an acclaimed performance of Mozart’s Requiem, broadcast on BBC Two in November 2020. Singers, Chorus and Orchestra will be socially distanced across the stage and auditorium and filmed in strict compliance with all relevant health and safety guidelines.

Featuring some of Handel’s best-known music – including the ‘Hallelujah’ chorus – Messiah tells the story of the birth, death and resurrection of Jesus. Composed in 1741, and premiered at Easter 1742 the piece speaks to the holiday’s celebration of hope and new beginnings.

ENO will return to the custom of performances in Handel’s lifetime, using a broader spectrum of solo voices than the usual four, featuring instead a bigger cast of eight outstanding soloists. Established, celebrated stars of the operatic world such as mezzo-soprano Christine Rice and countertenor Iestyn Davies, join the exciting new talents of current and former ENO Harewood Artists (sopranos Nadine Benjamin and Nardus Williams, tenors Anthony Gregory and John Findon, baritone Benson Wilson and bass William Thomas) to perform this popular piece.

ENO Artistic Director Annilese Miskimmon said ‘Returning to the London Coliseum, the first time since performing the haunting Mozart’s Requiem in November, will be hugely emotional for us as a company. Handel’s beautiful music transcends the specifics of its biblical text in embracing the possibility of hope and rebirth after the darkest of times.’

ENO Music Director Martyn Brabbins added ‘Handel’s Messiah remains one of the true glories of musical creation, and a cornerstone of the repertoire of orchestras, choruses and solo singers throughout the world. Now approaching its 300th birthday, Messiah contains some of the most memorable and moving music from the Baroque era. This performance is sure to bring joy and happiness to all who experience it.’

Members of the award winning ENO Chorus and Orchestra will be conducted by Handel expert Laurence Cummings, and joined by eight acclaimed soloists.

A noted authority on Handel, Laurence Cummings ‘now ranks as one of the composer’s best advocates in the world… he matches Handel’s energy and invention with unmistakable lyricism, generosity and dignity’ (the Guardian). Laurence will conduct a stellar lineup of some of opera’s most exciting talent; here he is back in 2009 talking about the oratorio:

Nardus Williams joins the lineup after singing the shared role of Mimi in ENO Drive & Live: La bohème – the world’s first fully staged drive-in opera – in September 2020 at Alexandra Palace. Dubbed ‘one to listen out for’ on the basis of her ‘creamy’ voiced (the Guardian) ENO debut as Micaëla in Carmen, Nardus is a current ENO Harewood artist.

Bringing her vocal prowess back to the London Coliseum, British soprano and former Harewood Artist Nadine Benjamin lends her ‘rich, glowing voice’ (the Guardian) to the lineup. A versatile and charismatic artist, Nadine’s acclaim for roles such as Musetta in La bohème and her ‘gloriously sung’ (Evening Standard) Clara in Porgy & Bess make her an ENO favourite.

One of Britain’s leading mezzo-sopranos, Christine Rice is a regular performer at major European opera houses including the Royal Opera House, Glyndebourne, Teatro Real, and Bayerische Straatsoper. Christine returns to the ENO following her role as Federica in 2020’s Luisa Miller.

Praised for his Handel roles at renowned opera houses like the Metropolitan Opera, the Royal Opera House and Glyndebourne, acclaimed British countertenor Iestyn Davies has previously recorded two versions of Messiah. He joins as a soloist, following ENO’s Rodelina in 2014, where his Bertarido was hailed as ‘perfection’ (the Telegraph).

Also marking his first performance at the London Coliseum is fellow Harewood Artist, British bass William Thomas. William made his ENO debut as a ‘captivating’ (the Guardian) Colline in ENO Drive & Live: La bohème at Alexandra Palace.
Messiah from ENO was commissioned by Head of BBC Music TV Commissioning Jan Younghusband for BBC Two, and produced for television by BBC Studios Music and Entertainment Cardiff.
Image - ENO
Email ThisBlogThis!Share to TwitterShare to Facebook