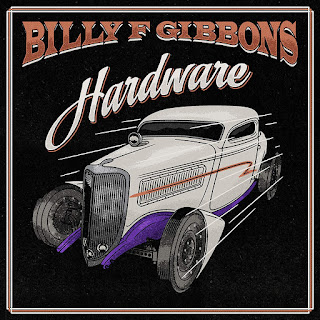 The video for the single was filmed near Joshua Tree in California, close to the album’s recording location in the high desert at Escape Studio, near Palm Springs. The new album itself was produced by Gibbons with Matt Sorum and Mike Fiorentino with additional production by engineer Chad Shlosser. Guns ‘N’ Roses, Velvet Revolver and The Cult drummer Sorum also plays on the album as part of a core band which also features guitarist Austin Hanks. It’s the same musical backbone that starred on Gibbons’ second solo release for Concord, The Big Bad Blues, which came out in 2018 and won the Blues Foundation’s Blues Music Award.

While most of the The Big Bad Blues and its 2015 predecessor Perfectamundo were formed of covers, almost all of the Hardware repertoire is comprised of original, rock-oriented material. Eleven of its twelve songs were written by Gibbons, Sorum, Fiorentino and Shlosser. The one exception is Hey Baby, Que Paso, first recorded by the Texas Tornados for their 1990 album Los Texas Tornados.

As a title, Hardware is an affectionate nod to the late and great recording engineer Joe Hardy, whose working relationship with Gibbons and ZZ Top goes back to the mid-1980s. The album also bears the influence of its recording location. “The desert settings, replete with shifting sands, cacti and rattlesnakes makes for the kind of backdrop that lends an element of intrigue reflected in the sounds created out there,” says Gibbons.

There's a guest appearance on the standout Stackin’ Bones by souful rock duo Larkin Poe, with whom Gibbons has been friendly for some time, after meeting via Tyler Bryant, husband of Larkin Poe’s Megan Lovell. Bryant had toured extensively with ZZ Top, and Larkin Poe shared the bill with Gibbons at the Love Rocks NYC benefit in 2019.

“We holed up in the desert for a few weeks in the heat of the summer and that in itself was pretty intense,” Gibbons concludes. “To let off steam we just ‘let it rock’ and that’s what Hardware is really all about. For the most part, it’s a raging rocker but always mindful of the desert’s implicit mystery.”

Hardware is released on June 4th. Pre-order on CD or Vinyl: https://found.ee/BillyFGibbons-Hardware

The full Hardware tracklist is: