News - Bellotto at the National Gallery 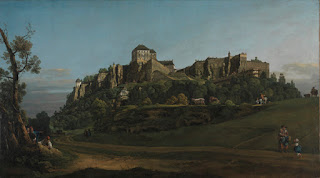 This year, the National Gallery in London will reunite five views of the fortress of Königstein for the first time in 250 years....

These views were painted by Bernardo Bellotto (1722–1780) at the peak of his career, when he was court painter in Dresden.

Once overlooked in favour of his more famous uncle and master Canaletto, with whom he trained in Venice, Bellotto is today recognised as one of the most distinctive artistic personalities of his age. This Room 1 exhibition will shine a spotlight on the National Gallery’s 2017 acquisition, The Fortress of Königstein from the North (1756-8) – the first 18th-century German view to enter the collection.

August III (1696–1763), Elector of Saxony and King of Poland, commissioned these five paintings in about 1756 as part of a larger series of thirty views of Dresden and its surroundings. Bellotto received payment for the pictures in 1758 and, although completed, they were almost certainly never delivered to the elector due to the escalation of the Seven Years’ War. 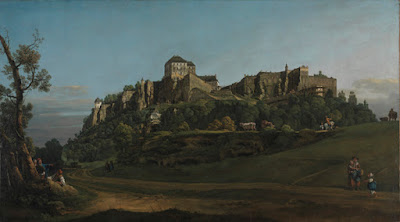 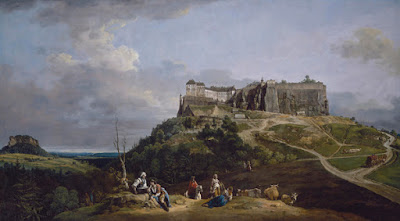 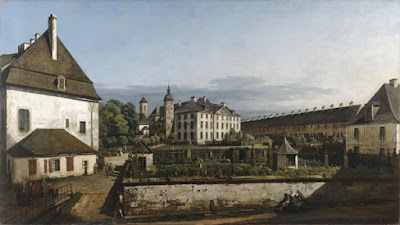 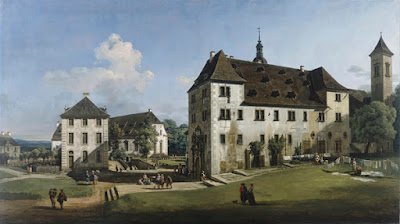 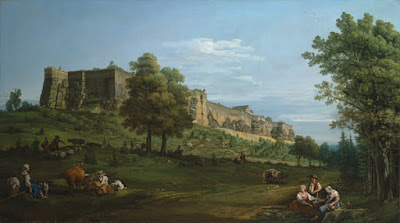 The fortress of Königstein, which is situated approximately 25 miles south-east of Dresden, appears largely unchanged from Bellotto’s own time. The five paintings – each of them 2.5 metres wide – show the ancient fortress from outside its walls as well as from within. Bellotto succeeds in capturing both the drama and detail of this commanding site. Stand back and you can see the sharp, angular forms of the fortress but look closely and you can make out the crumbling stone walls, tiny soldiers on the ramparts and women hanging washing in the courtyard.

Applying what he had learnt in Venice to highly original panoramic depictions of northern Europe, Bellotto took the tradition of view painting in an entirely new direction. The works all demonstrate his outstanding technique and innovative approach to painting views, including the use of a camera obscura – the precursor of modern cameras – that helped Bellotto plan his compositions in minute detail.

Visitors to this Room 1 exhibition will be encouraged to take part in a dynamic viewing experience of the five paintings, moving from one monumental view to the next, as if moving around the site of the fortress itself, and will be able to appreciate the contrast between the fortress’s forbidding walls and the pastoral calm of its surroundings, with the hustle and bustle of everyday life on the inside, as seen in the courtyard views.

The exhibition is curated by Letizia Treves, the National Gallery James and Sarah Sassoon Curator of Later Italian, Spanish, and French 17th-century Paintings. She says: 'In 2017 the National Gallery was finally able to acquire a painting that shows Bellotto’s exceptional skill and originality as a view painter. Since then, I have dreamt of reuniting his five views of the fortress of Königstein which, in their magnificence and grand scale, rightfully point to Bellotto being among the greatest view painters of his age.'

Dr Gabriele Finaldi, Director of the National Gallery, added: 'Following the purchase for the nation in 2017 of Bellotto’s masterpiece, The Fortress of Königstein from the North, this will be the first time since the eighteenth century that all five paintings by him of this dramatic site in Germany will be shown together. Bellotto made a dramatic contribution to European view painting combining a cinematic sweep and extraordinarily fine detail.'

Born in Venice in 1722, Bernardo Bellotto had a precocious talent. He received his earliest training with his uncle Canaletto and was accepted into the 'Fraglia dei Pittori' (Venetian painters’ guild) aged just 16. In the 1740s he travelled extensively around the Italian peninsula, producing views of various cities.

He was called to Dresden in 1747, and the subsequent year was appointed Court Painter to Augustus III, King of Poland and Elector of Saxony, receiving the highest annual salary ever paid by that court to an artist. Following the escalation of the Seven Years’ War, Bellotto worked at the courts of Vienna and Munich, before returning again to Dresden. He spent the last 13 years of his life in Warsaw.

Although 18th-century contemporaries appear to have had some difficulty distinguishing between Bellotto’s Venetian views and those of his uncle, there are marked differences between their styles. Bellotto tends towards a more silvery light, a cooler palette, and a greater sense of monumentality (even when a composition is derived from a Canaletto prototype, Bellotto tended to increase it in both size and scale). One of the most distinctive elements of Bellotto’s pictures is his use of impasto, particularly in the sky, where broad brushstrokes denote clouds and changing light on the horizon.

Today, Bellotto is best known for his views of Northern Europe, and the views he painted for Augustus III during the first Dresden period mark the height of his achievements. Such was Bellotto’s precision that his late views of Warsaw played a crucial role in that city’s reconstruction after the Second World War.