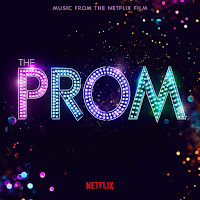 For Educating Omand, Susan Omand has been listening to music that she missed out on first time round. This year, our team of writers suggest albums for her to listen to in Educating Omand: Gap Year. This week, it's the soundtrack of the Netflix film The Prom, suggested by Paul Robinson...

If you know me at all, you know I love a good theatre musical [apart from Jukebox musicals – Ed] so, surprisingly, I hadn’t actually watched The Prom, other than the trailer, before this soundtrack album was suggested by Paul Robinson, so the songs didn’t have any visual context for me as I settled down to listen.

It is very musically music too – I know what I mean – from the very Mama Mia-esque intro to the Changing Lives overture to the gently romantic Simply Love as it all works out ok, it’s formulaic but marvellous sparkly fun as four “off Broadway” stars come to the rescue of a high school kid, Emma, who isn’t allowed to take her girlfriend to the prom and, as a result, they come to terms with their own pasts as well as Emma and Alyssa’s future. As with all good modern musicals (it was adapted from the 2018 stage musical by Chad Beguelin, Bob Martin and Matthew Sklar) it’s a real feel-good story that hits all the marks of big character developing intro number, exposition ballad about the problem, pre-interval cliff-hanger dance number, will they/won’t they, heart to heart flashback of personal experience, lots of working together, huge success happy clappy crescendo, panto walk down ending, happy clappy reprise as the theatre crowd get to their feet and dance along in a standing ovation. It ladles on the schmaltzy storyline as thickly as theatre makeup, throws up no mega surprise twists and would be incredibly satisfying viewing for a typically Saturday afternoon matinee. More than that though, it feels, from the songs alone, that the film knows exactly what it is, and that self-awareness stops it being overly pretentious. Like I say though, I’ve not watched it on screen yet, so maybe that perception is wrong.

For a cast recording, they got some big names to do their own singing; Nicole Kidman’s soft vocal, which first came to the fore for me in the 2001 film Moulin Rouge, really fits her character in the film, James Corden, whatever you may think of him in other ways, really can sing and Jo Ellen Pellman, who plays Emma, is going to be a name to look for on stage and screen in future.

It’s Meryl Streep though who is, to borrow the phrase from the quote at the top, the real tour de force in this. Her rendition of It’s Not About Me, complete with mariachi trumpets, is a triumph, my favourite song on the album and the one that best, for me, highlights the wonderful humour present in the lyrics of all the songs.

So yes, The Prom is great Priscilla-esque fun and yes, I probably will watch the film off the back of listening to this soundtrack. But, am I educated? Honestly, no. This is so far inside my comfort zone (Paul knows me well obviously) that the only surprising thing is that I had never listened to it before.