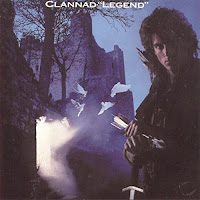 For Educating Omand, Susan Omand has been listening to music that she missed out on first time round. This year, our team of writers suggest albums for her to listen to in Educating Omand: Gap Year. This week, it's Legend by Clannad, suggested by legend Daniel White...

I do like Clannad but I couldn’t eat a whole one. By that I mean I really have to be in the right mood to listen to it and, even then, not a full album in a single sitting. So, with that in mind, I dived in to Daniel White’s suggestion for this week’s Educating Omand.

Legend is their 1984 album and formed the soundtrack to the TV show Robin of Sherwood. I loved the show back in the day but OMG this album is so dated and clichéd when taken out of context. It opens with Robin (The Hooded Man) which was the theme tune to the series and will likely be the best-known track on the album because of that. While I remembered the song, it had really lost its sparkle for me. Where I remember the instrumentation being full, folky and lushly verdant, like the forest of Sherwood itself, it’s now electronically weedy with reedy vocals and even the odd duff note (although, to be fair, that may be the 2003 remastering at play because that’s the only version I could find). Next up is Now is Here, which is actually better, maybe because of the Knoplfer-esque guitar or it may be because my ear and headspace are adjusting to there not being a real flute involved anywhere. Herne starts well, with an evocatively misty intro, but the stubbornly strident synth (nothing subtle and ethereal here) is dating and off-putting. It’s like they said “let’s update a nice Celtic folk tune to be modern 80s just by adding synth keys and drumpads” because that’s what they’ve done. Together We is much better. Yes, the piano intro doesn’t fit at all with the penny whistle and harp but it at least sounds more like they’re trying and it’s a bouncy little tune. The fight noises and hoofbeats add to the visual evocation and give it a bit of (no pun intended) grounding in its TV setting.

Darkmere is back to being synth heavy and sounds dated because of that. I think, because digital keyboards back in the day were just that… digital. On or off. Same noise, same tone, no nuance. So everything synthy sounded like a speeded up or slowed down version of the Airwolf theme whether you wanted it to or not. Thankfully it’s a short track though. Strange Land is… well… strange, but in a good way. Nice use of the harp for the main melody to dampen the harshness of the synth this time, as it, in turn, is effectively used for brassy blast highlights instead. Scarlet Inside errs more towards the insipid than the evocative and is again spoiled by the brash synth which is way too much “upfront” in the mix for the gentleness of the rest of it. A lovely plucked-string intro to Lady Marian leads me to hope that it isn’t synthly-spoiled and it’s not, instead it turns into a very Princess Bride style flute ‘n’ harp ballad. Battles is a couple of minutes of totally out of character, and brilliant, timp and bass and the original album rounds out with Ancient Forest which is as near to “a bop” as you’ll get with Clannad. The guitar and the harmonies work and the quieting of the keyboards has made a positive difference. A pleasant way to end a very variable album.

I’ve also just noticed that the tracks on the album seem to be mostly alternating bad and good for me, so maybe if I listened to just the even numbered songs, plus Battles, I’d get a good EP out of it. However, am I educated? Ish. It has re-affirmed my belief that Clannad is okay only in small doses and it has brought home to me that some music from 1984 firmly need to stay there!
Image - Amazon
Email ThisBlogThis!Share to TwitterShare to Facebook