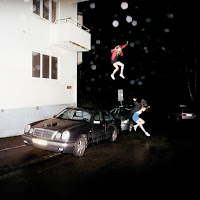 For Educating Omand, Susan Omand has been listening to music that she missed out on first time round. This year, our team of writers suggest albums for her to listen to in Educating Omand: Gap Year. This week, it's Science Fiction by Brand New, suggested by Nate McKenzie...

This is what you would get if The Orb remixed a Doors album sung by Nick Cave.

That was my main thought as I first listened through the next album on my Educating Omand list, Science Fiction by Brand New. I am not, however, brand new to listening to Brand New as a band. That happened in last year’s Educating Omand list when I listened to Deja Entendu. The TL;DR of that one was that it was not bad but nothing special, with one stand out track in Good to Know That If I Ever Need Attention All I Have to Do Is Die.

Science Fiction is, for me, totally different. I’m not sure if it’s an evolution of my listening or in their music though. I suspect more the latter because there is upwards of 14 years difference in the release date of 2017’s Science Fiction from 2003’s Deja Entendu, rather than the few months between me listening to both albums. And what a difference it has made.

The experimentation in Science Fiction is stunning, showing a band that is a lot more comfortable in its own creativity and ready to try things to please themselves rather than trying too hard to impress a perceived audience. For example, the album opens with a sample of a psychologist’s taped interview with a patient recounting their dream. There’s echoes, oddly atonal strings, reversed reverb, it’s highly discomfiting and the kind of thing that makes you have an instant reaction to it – either “wow, yes” or “wtf, no”. I was firmly in the former camp. It immediately attracted my attention and made me sit up and take notice, this was going to be something new, intriguing, different. The rest of that track, Lit Me Up, is not as sample heavy until the reversed tape at the end of it, but it is incredibly cool with lethargic guitar and a heartbeat of a bass adding a druglike languor.
Next up is Can’t Get Out, again very bass heavy (which is always a good thing) but a bit more up-tempo with lots of speaker feedback and interesting vocal harmony in the dark lyrics.
Waste is a scream. No really, it starts with a scream, and then is almost a ballad that builds layer on layer with fascinating industrial electronica undercutting the orchestral strings and thrumming guitars, with the auditory clean up (I know what I mean) really providing a lift of positivity at the end.
From ballad to acoustic folk, we dive headlong into renaissance fair minstrel territory with Could Never Be Heaven with such a lilting touch to the stripped back start before it goes full psychedelic hippy prog – very Mamas and Papas, think California Dreaming and you get the drift. It’s a track that keeps you on your toes though; having lulled you into a hey-nonny sense of security it drops you back to the psych tape. If this was a film, it would have cut out of a dream sequence back into the disinfectant smell of distemper green corridors. Nice wrong-footing.
The Same Logic comes next and it perpetuates the disorientation of that drop out. The vocals are incredible, shifting from melodic to metal and back again, with such a multitude of noises in the background that it really shouldn’t work but it really does. Probably the most musically interesting track on the album.
Percussion and simplistic melody delineate 137 (presumably named after the radioactive Caesium isotope), with some incredibly dark lyrics in a childlike playground rhyme chant:

Let's all go play Nagasaki
We can all get vaporised
Hold my hand, let's turn to ash
I'll see you on the other side

Yeah, I need to not think about that too much. The richness of the song builds though, and again it adds in the unexpected with more spoken dialogue samples that just add to the bleak. Wonderful stuff.

The repetitive guitar riff in Out of Mana is very clarion-like and sits marvellously incongruously among the heavy rock sound of the rest of the song. That bell-like feel becomes real as the track changes abruptly to a real bell, like you find on a buoy in rough seas, with a muffled voice and single guitar. I’m learning to expect the unexpected now though and refuse to be surprised any more.
This segues nicely into In The Water, funnily enough, given the buoy allusion in the last track, and a coolly prog feel with Hammond keys picking up the melody over a plinky guitar taking me back to a late sixties/early seventies comfort zone. As always though, the comfort zone doesn’t last, with a spoken sample adding an edge to the late-night feel.

Desert is probably the most Doorsy track on here, with touches of Jefferson Airplane’s White Rabbit in the tone of the vocals. The buzzes, beeps and whispers keep you easily uneasy though and stop the dwam [a Scottish word meaning sort of a dream-state – Ed] settling in.
No Control is very controlled, surprisingly orderly in its abandonment, very REM to start with but again you get thrown by something, this time it’s like you’ve switched off your REM record and can hear the singing and music coming from the next apartment over. The manic laughter is scary though.

The other numeric track, 451, is the penultimate song. An allusion to Fahrenheit 451 probably, whether the book or the actual physics phenomenon is unknown but it’s a bop. No, really, heads were banged to this one and it really lifted my mood. It also managed to surprise me by offering no extra surprises! Huh, neat.

Batter Up [nothing to do with fish suppers – Ed] is the final track and it far from batters, being very laid back and low key with Beach-Boys-close vocal harmonies, slow beat percussion and a very ambient sound, ending on a marvellous thunderstorm that takes you back to the corridors of the psych ward. A grand finale indeed.

So, yes, this is night and day for me with my previous interaction with the band. Far from being, ironically, something washy that I’d heard before like Deja Entendu, Science Fiction was a complete art experience for me, demanding considerable concentration but rewarding that in buckets with vivid imagery, visceral reactions and a tangible feeling of my brain being prodded. This is a stunning album and will be added to the rotation, with weighting to end of the bottle/night playlist. Am I educated? Yes, Mr McKenzie, yes I am. Although this now means I’m going to have to go back and listen again to Deja Entendu to see what I missed there.
Image - Amazon
Email ThisBlogThis!Share to TwitterShare to Facebook