Turn That Noise Down – Use Your Illusion II 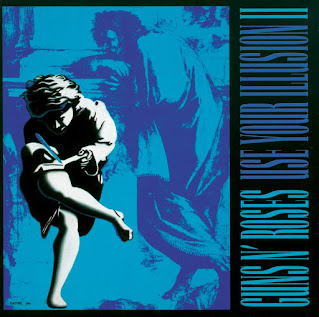 So many well-known albums turn 30 this year and Steve Taylor-Bryant and Susan Omand travel back to 1991 to revisit some of the sounds of their youth that made parents shout "Turn that noise down!" This week, Steve goes illusional... AGAIN...

Read Steve's review of Use Your Illusion I here


1991 was the year of Guns ‘n Roses' follow up to the epic Appetite For Destruction that had helped to make them a huge band that drifted from the clubs of L.A. into huge theatres. The double release of Use Your Illusion I & II, along with oversaturation on MTV, a tie in song to the year’s huge blockbuster Terminator 2, and constant magazine articles saw the band skyrocket into stadium and festival headline territory for the first time. I remember queuing outside a local record shop awaiting the midnight opening to buy both on gatefold vinyl, I remember going home and recording them onto cassette for the car and the Walkman [Yes, you're old – Ed] and let us not forget we then had to wait 17 years for another album of original material (I am one of the few that really appreciate The Spaghetti Incident, but I get why others do not). SO, to recap… Massive hype, one of the world’s biggest ever tours, a change of drummer at the start, a change of guitarist soon after, and a near two decades wait for the next release which only had Axl and Dizzy in the line up from Illusions I & II, but were they any good? Kind of. This week I will look at Illusion II, but fans are constantly telling me that these two albums are the best the band ever released and whilst I love both records, I am in the camp that flat out states Chinese Democracy is better. By the end of the two retrospective looks at the Illusion projects you will agree with me. Or you will be wrong.

So, after finding 8 great tracks out of 16 on Illusion I [here] how many will we get on the second instalment of this behemoth 1991 release? Let us see, shall we? Civil War starts the record, with its Cool Hand Luke quote, acoustic guitar and Axl whistle. It is a song many of us knew before the album dropped as it had been the B-side to the Terminator single You Could Be Mine. I really like Civil War and it's okay as an opening track as it's essentially the first track after intermission. If Illusion II was a standalone record it is a poor start to an album, but, as a song, it's brilliant and one of the highlights across both records. But we get that ‘follow up’ problem again. 14 Years, a song by Izzy about Axl, whilst fun, is not deserving of a place on a GnR record. The honky tonk piano is too much, this should have been saved for Izzy’s solo record to be honest. Great song, not a great GnR song. Yesterdays I quite like but, again, is it good enough to be at the start of an album that is supposed to blow all other records out of the water? Maybe as an allowable filler later in the record it may have worked but it is glaringly out of place where it is. Knockin’ On Heaven’s Door is fine, a good cover but I am still not sure it would not have been better placed on Spaghetti Incident to be honest. Did not even like it live. Not a GnR song at all. Which brings me to track 5.

Track 5 is Get In The Ring and is most definitely a GnR song in that it is Axl abusing just about anyone and everyone in a way that only Axl could do. It has that angst we were all feeling coming out of the 1980’s and would still work today if changed a couple of the names mentioned. Still love it today. Still one of the great lyrical moments in any GnR song…

You got your bitches with the silicone injections
Crystal meth and yeast infections
Bleached blond hair, collagen lip projections
Who are you to criticize my intentions?
Got your subtle manipulative devices
Just like you I got my vices
I got a thought that would be nice
I'd like to crush your head tight in my vice...pain.

Shotgun Blues is great and follows Get In The Ring really well and now we are off to the races. Breakdown, whilst a little hillbilly folksy at the start, is a truly excellent song and one of the best that GnR have ever recorded and is followed by one of my all time favourite GnR tracks of all time, the only track I would swap into Democracy, Pretty Tied Up (The Perils of Rock n Roll Decadence). What an astonishing song this is. Great instrumentation throughout, the sitar, the guitars, the piano all have their place and Axl is vocally at his best. Timeless. Locomotive, with that Sorum drum intro followed by recognisable Duff bass, is another that is just so good, very GnR, great live and a worthy inclusion on just about any record. Lyrically interesting. I just did not buy that distorted Axl vocal on the verse else it would be another worthy of Democracy inclusion.

You can use your illusion -
Let it take you where it may
We live and learn
And then sometimes it's best to walk away
Me I'm just here hangin' on
It's my only place to stay at least
For now anyway
I've worked too hard for my illusions
Just to throw them all away.

So Fine is so bad. Sorry Duff but nope. Estranged is another that went into uber rotation and grand video territory as the final part of the Don’t Cry/November Rain ballad trio. Was great, was enjoyable, was massively overplayed. Then the album ends on a damp squib of three songs. You Could Be Mine was okay as credits track for a Hollywood film but wasn’t a serious song was it? Don’t Cry (Even More Lyrics To Keep The Song Alive Version) does nothing, and what in the world was My World? It could have been a very interesting song, a great way to end like Coma did on the first but it's 30 seconds of Axl trying very hard to be Trent Reznor and failing. There is much more exciting experimental stuff on Democracy.

So how did we do out of these 14 songs? Tape recorders at the ready…

Six from 14, a grand total of 14 tracks from 30, proving less than half of the tracks on the two Illusion records are decent. It's sounding like I am being harsh and maybe I am, I truly love all GnR albums and most have tracks that I favour more than others but if you are going to spend four years and millions of dollars producing 30 tracks which a load of were already written and deemed not good enough for Appetite than I am of course well within my rights to judge you. Do the Use Your Illusion albums hold up 30 years later? Probably not, but if you cherry pick the 14 tracks that I have given you across these two retrospectives and create Use Your Illusion II ½, you’ll have one incredible record. Appetite for Destruction was almost faultless, Chinese Democracy is almost faultless, but Use Your Illusion I & II have 16 tracks not deserving of inclusion on a record so sorry folks, they're not as good as you remember them to be.