Turn That Noise Down – Use Your Illusion I 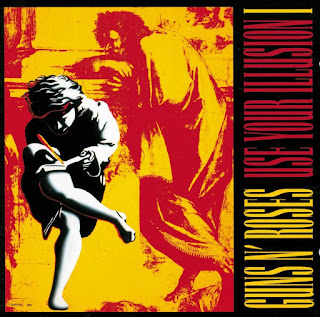 So many well-known albums turn 30 this year and Steve Taylor-Bryant and Susan Omand travel back to 1991 to revisit some of the sounds of their youth that made parents shout "Turn that noise down!" This week, Steve goes illusional...
1991 was the year of Guns ‘n' Roses follow up to the epic Appetite For Destruction that had helped to make them a huge band that drifted from the clubs of L.A. into huge theatres. The double release of Use Your Illusion I & II, along with oversaturation on MTV, a tie in song to the year’s huge blockbuster Terminator 2, and constant magazine articles saw the band skyrocket into stadium and festival headline territory for the first time. I remember queuing outside a local record shop awaiting the midnight opening to buy both on gatefold vinyl, I remember going home and recording them onto cassette for the car and the Walkman [No, you're old – Ed] and let us not forget we then had to wait 17 years for another album of original material (I am one of the few that really appreciate The Spaghetti Incident, but I get why others do not). SO, to recap… Massive hype, one of the world's biggest ever tours, a change of drummer at the start, a change of guitarist soon after, and a near two decades wait for the next release which only had Axl and Dizzy in the line up from Illusions I & II, but were they any good? Kind of. This week I will look at Illusion I and I will get to Illusion II in short order [next week - Ed], but fans are constantly telling me that these two albums are the best the band ever released and whilst I love both records, I am in the camp that flat out states Chinese Democracy is better. By the end of the two retrospective looks at the Illusion projects you will agree with me. Or you will be wrong.

Kicking off with Duff’s bass, Sorum’s heavy tom work, and really catchy riffs Right Next Door to Hell is a great opening to any album. Axl is as Axl sounding as he ever has been and by the halfway point anyone who knows anything about recording drums can see why Matt Sorum was brought in to replace to erratic Steven Adler, there is a driving professionalism in the kit sound that was not there on Appetite. Sorry Adler fans, facts are facts. But then we come to one of my biggest complaints on both Illusion records, greatness is not followed up by more greatness. Illusion I starts with a kick ass tune and follows it up with a mopey filler piece in Dust and Bones, a cover of Live and Let Die that McCartney should have killed in the concept phase, and the most over played ballad of the 90’s that showed the band were finding it hard to forget their hairspray roots in Don’t Cry (Whatever Lyrics They Feel Like This Time). A lack of pace, sluggish filler for a high percentage of the first record already and I have not got to track 5 yet. However, track 5 is one of the best songs on either Illusion. Perfect Crime is beautiful in a ‘Parent Advisory’ way. It has great guitar work from Slash of course but listen to the rhythm coming underneath from Izzy! Duff and Matt are fully synched on the back end, Axl is venting spleen with every syllable and the song is a perfect rock record which is followed up by [checks notes] You Ain't the First. Oh, come on! For fucks sake, any arguments that this is better than Democracy are now extinguished. We are track 6 and have had 2 decent tunes. Bad Obsession I really like, should have followed Perfect Crime in my opinion, heavy blues rock, more cowbell than a Will Ferrell SNL sketch, and Axl at his least polite, what is not to love?

Back Off Bitch is okay as well, neat intro that worked well live, a quick paced heavy riff and Axl’s long notes, typical GnR sound. Followed by Double Talkin’ Jive which I know a lot of fans consider filler, but I genuinely think shows Izzy Stradlin’s genius in a perfect couple of minutes. November Rain is next. Great on first listen but its three decades long and was on rotation with radio and tv stations so much in the 1990’s I am now immune to any charms it once had. The Garden featuring Alice Cooper is a weird little track that does not really fit on an epic rock album, could work as a special guest track on a live show, but I think is a waste of both GnR and Cooper’s talent, however the next track also has Garden in the title, Garden of Eden, and is one of my favourites across the records. Great karaoke style video as well where the lyric ball cannot keep up with Axl that was on Beavis and Butthead. Memories. Then we come to the final four tracks on Illusion I, yes there are 16 tracks, and these four encapsulate everything that is wrong with both Illusion records: Decent, waste of time, meh, epic in that order. Albums should not be filled like that. Don’t Damn Me is great and Coma is the best end to an album in the history of album endings but what the actual fuck are Bad Apples and Dead Horse actually doing on a record in the first place?

In 16 tracks there is a decent mini album available for you. I am not sure if there is a streaming version of mix tape available because I am nearly 46 and technology is beyond me, but if there is or if you are also late 40’s or above and still have a tape recorder then remake Illusion I with this running order and you’ll have a better record…

There it is. Use Your Illusion I has a grand total of 8 great tracks. Albums should only have 8 tracks anyway that way the chance of filler is minimised. I hope Illusion II holds up better on relisten because all you Chinese Democracy haters are beginning to look foolish!
Image - Amazon
Email ThisBlogThis!Share to TwitterShare to Facebook